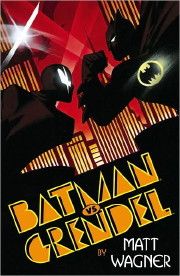 [[[Batman Grendel]]] collects two short series – each one was just two 50-page issues long – originally titled [[[Batman/Grendel]]] and [[[Batman/Grendel II]]]. The slash has disappeared for the collected edition – perhaps because now the names of two male characters separated by a slash brings with it entirely different expectations?

(I’m reminded of Terry Pratchett’s never-quite-named character, from a tribe who are called after the first thing the mother sees after birth, who wished, desperately, that his name was Two Dogs Fighting.)

(And the very small “Vs.” on all of the online bookshots does not actually appear on the book itself, which is simply titled Batman Grendel, as if it were the product of some comic-book equivalent of a corporate merger.)

So what we have first is a 1993 story with Batman battling the original Grendel, Hunter Rose – who is in many ways something like an evil Batman, or a twisted mirror image. Rose is a self-made man, master of arcane fighting arts, and the scourge of the underworld in his hometown…although that’s because he took over in his town. Rose is incredibly violent in a very comic-booky way – he has the typical nonpowered superhero’s utter control of violence and movement, but uses it to slaughter at will.

The plot is typical of that era of Wagner’s Grendel work, filled with overlapping internal-dialogue narration from all of the main characters – Batman and Grendel plus two young women roommates who are caught up in Grendel’s schemes – lots of small panels in complicated layouts most of the time, and Byzantine plotting on the part of Grendel.

Hunter Rose comes to Gotham specifically to…well, he obviously has a plot, and it involves Batman, but it’s not entirely clear what that plot is. He isn’t out to kill Batman, since he could have done that if he wanted to, and he isn’t out to discover who Batman is. I suppose the whole thing was an excuse to fight Batman, under the assumption that neither of them would win. Rose is incredibly arrogant and self-assured – and, as Wagner writes him, with good reason to be, since he’s fated to die in a story already told and nothing can seriously harm him except that – but that still comes closer to a naked “let’s you and him fight” than I’m comfortable with. But, of course, it was 1993, when fight scenes were their own reason.

The plot convolutes from there, as Grendel plots ceaselessly, kills ruthlessly, and torments those two young women I mentioned before. (One thing that annoys me about the Hunter Rose Grendel these days is that he not only uses people for his own ends – you expect that from villains – but that he’s a true sociopath, and uses people, or kills them, just because they’re there.) Batman chases him, and plots some on his own. Grendel is also pretending to be the Riddler, for no good reason, and the knowledge Batman and Grendel have of each other varies wildly depending on what the particular page of the story requires.

The ending is inconclusive, as it needed to be – crossovers like these can never end with one character getting the better of the other, since both need to be put back neatly in their boxes for the next set of stories. But the way these two characters both basically think “Wow, that was a tough fight. I’ll just utterly ignore that person for the rest of my life, and everything will be fine” is more than slightly silly. But, again, it was 1993, and much, much sillier things were a few inches away on the new-comics racks.

The second story was from 1996, and sees Wagner turning to a more streamlined storytelling style. His art is still as detailed, though more open, less crabbed, and Wagner still is fond of complicated page-layouts, but the flood of internal monologue has ebbed back to just Batman, and he’s more laconic than he was.

It’s four years later – Hunter Rose died a year after the first miniseries (in his own story) and now there’s a major exhibit of supervillain memorabilia at the Gotham Museum, including what’s left of Rose’s skeleton. An unexplained event brings Grendel-Prime – a cyborg killing machine originally from about five hundred years up the Grendel timeline (but here taken from much later in his life, possibly around AD 3000) – to the Gotham Museum, and into an immediate firefight with Commissioner Gordon and a large number of cannon-fodder cops. Batman is nearby, and he fights this new Grendel.

The rest is a more straightforward cat-and-mouse game – well, cat-and-wolf, maybe, since the “mouse” is bigger, tougher, and vastly more dangerous than the putative “cat.” Grendel-Prime claims to want to get back to his own time, and seeks the technology to do it – but he may want to leave a giant smoking hole behind him where Gotham used to be. (For what reason isn’t clear – or perhaps just because he’s a killing machine; that’s just what he does.)

And then this one ends slightly better than the first story, but pretty much as you’d expect – both characters go back to their own individual milieux, unchanged.

As major-character inter-company crossovers go, these two were quite good – Wagner is a compelling storyteller and a gifted artist. All of the pages look wonderful, read well, and propel the story forward. It’s just that the whole thing, taken all-in-all, is purely a sidebar, and by design cannot affect or influence either character’s central story. So it’s purely diverting – in both sense of the word.