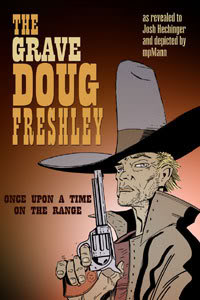 Cowboy and tough guy Doug Freshley takes a bullet to the head at the story’s start, but that’s not enough to stop him from a zombified revenge mission in the five-issue series from Archaia Studios Press. Hechinger recently spoke with me about where that idea came from, his love of Westerns and his upcoming projects.

COMICMIX: First, I’m curious about your choice to do a Western. Is that a genre you’ve long held an interest in? How did the idea of the book come about?

JOSH HECHINGER: I didn’t really care about Westerns one way or another for a while, actually. And then in high school, a friend of mine lent me The Good, The Bad and The Ugly… Pow, that was it. Instant Western fan.

As for Doug, well, a few weeks after watching The Good, The Bad, and The Ugly, I was doodling in class instead of paying attention. And I doodled this zombie cowboy and a kinda Huck Finn-y kid. I didn’t really do anything more with it, but it sort of hung around in the back of my head until Marv [artist mpMann] came calling.

CMix: How much comics writing had you done previously?

JH: Well, this is my first real book. But I’d been writing comics nobody else saw since eighth grade or so, and I wrote something like 400 pages of various scripts in a year and change of college. I was doing three to five pages a session, twice a day. Although to be fair, most of it was kinda completely crap.

But anyway, by the time I started Doug, I at least knew how to sit down and just pound out pages. The pages probably weren’t crackling with genius, but I find it easier to clean up something than to nail it on the first draft anyway. The important thing was that I wasn’t sitting down and getting psyched-out by a blank page.

CMix: Recent Westerns seem to have fallen into either being very serious or very violent. Grave Doug Freshley is, in ways, lighthearted, though it also incorporates violence and the supernatural angle. What it reminded me most of was Shane. Were there any specific Westerns (or other stories) that shaped or affected your vision for the story? 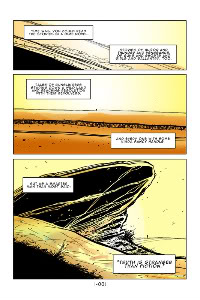 JH: Comparing it to Shane‘s a pretty high compliment, so thanks for that. I always pitched Doug as "Leone meets Looney Toons". Leone’s Westerns were my gateway into the genre, so they were the big influence; while I was writing the book, I also got into Deadwood and the old Bat Lash comics.

So I kind of took Leone’s pacing, Looney Toons action, a bad stab at David Milch dialogue, and Bat Lash‘s comic genius and threw it all into a pot. Having everyone speak in dialect probably came from reading reprints of the All-New, All-Different X-Men stuff as a kid, to be honest.

CMix: What were you hoping to do differently from Westerns that have come before, particularly the latest batch that have cropped up in Jonah Hex, The Lone Ranger, etc.?

JH: I didn’t actually think about it. For one thing, I was writing Doug real early in the whole Western comics comeback, so there wasn’t too much to kick against. I’m not sharp enough to really chart genre trends, so it just kind of ended up being a happy accident that I made Doug while Westerns are a healthy-ish genre again.

Mostly, I just wanted to do the kind of book I wanted to see on shelves. It ended up being a Western…so, okay, Western wise, I like Spaghetti Westerns, and Maverick, and Bat Lash. In general, I like fun genre comics over serious literary ones, so I wrote as fun a Western as I could while still keeping that kind of gritty, sweaty, slow-burn Leone vibe.

CMix: The story walks a fine line, balancing the violence and the humor. Was it a challenge, using both those elements without going too far toward one or the other?

JH: Well, yes and no. On one hand, I’m not all that smart and/or serious as a writer (or a person), so any Western I wrote wasn’t going to be Unforgiven, y’know? I didn’t feel like I had to rein in the urge to go ultra-bleak, because I don’t have that anyway. On the other hand, I have my main character get shot, point blank, in the head, in the first issue. 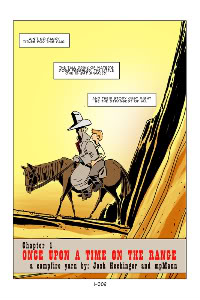 But, y’know… he’s the walking dead, and I needed to show how he got that way, and why he was pissed about it. And while I can make everything before or after that scene funny, I think that scene needed to have a horrible punch to it in order to make it work for the readers.

I really took my cues on tone from Japanese comics. One of the things they’re very good at is letting the funny parts of a story be funny, the shocking moments be shocking, and not letting any story have those scenes be mutually exclusive. They’re very good at having five puns on one page, sucking chest wounds on the next, and making the transition work somehow.

CMix: Doug is a really original gunslinger type, not least of which is the hole in his head. Beyond that, how did you set about making him stand out as a character?

JH: A lot of Western heroes are put into situations where it’s like "is Blondie smarter than Tuco?" or "can Col. Mortimer outdraw that dude with the pocket watch?" or whatever. The characters survive by being smarter or quicker than the guys trying to kill them.

Doug’s pretty smart, but Bat kind of cancels that edge out. And Doug can’t be quicker than anyone, because, y’know, early onset rigor mortis or whatever. But on the plus side, he doesn’t have to be, because it’s not like they can make him any more dead. So Doug is more about "slow and steady wins the race" than "the fastest gun in the West".

CMix: I actually just watched The Good, The Bad and The Ugly, and midway through the movie I felt compelled to start sketching gunslinger characters. What is it about that movie?

JH: Y’know, it’s probably because Leone has such a great sense of visuals. I mean, some old cowboy movies just look like a bunch of dudes in cowboy hats standing around on dirt. Meanwhile, Leone’s shooting people’s faces like they were interesting bits of landscape, and shooting the landscape like it was a character.

Plus, everyone looks badass in Leone flicks. Sweaty, but badass.

CMix: Did you seek out mpMann as an artist? How did that partnership come about?

JH: I was bumming around The Engine, Warren Ellis’ old board, and I posted about the first rejection letter I got, where the publisher had basically told me "that’s not a bad comic, but you kind of need an artist". Marv applied for the gig after I posted about it… only he applied like, a day after I gave it to another artist.

Now, I was something like 19 at the time, so the fact that an artist of Marv’s talent would come to a snot-nosed punk like me was very humbling. So I quickly whipped up three other book ideas to give him, one of which was based on the zombie/Western/buddy comedy I’d had floating in the back of my head since I did that doodle.

He dug it, and the rest is history.

CMix: How active were you in designing the look of the book, and how does the final product compare to how you’d envisioned it? 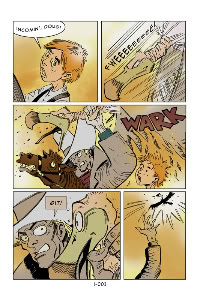 JH: For the most part, I let Marv go to town on the scripts; if he wanted to change something, we’d talk it over, and I usually trusted his instinct on a shot or a page composition. Whatever makes the best comic, y’know?

I’d get his input on the scripts, he’d get my input on the covers and art, and we’d work from there. I really couldn’t have asked for a better first collaborator. But really, the best part of the comic was getting pages back from Marv and forgetting that I’d written them. He just completely, page for page, out-did the book that was in my head.

CMix: What brought you to ASP?

JH: Marv had done Lone and Level Sands with A. Dave Lewis, and ASP had put it out. He also had two other books coming out from them, Inanna’s Tears and Some New Kind of Slaughter. So they knew Marv, they knew he did good work, and that sort of canceled out the fact that they didn’t know me from Adam.

CMix: How long did it take from idea to finished product?

JH: I’d say it took a year and change to get Doug published. What happened was, me and Marv started it, pitched it to one publisher, and then he had other work to do while we were waiting to hear back. And then when we got to ASP, I had to break the script down into five issues (it was one big graphic novel, originally), so that took more time (although it definitely made for a better book).

But honestly, Marv kinda went above and beyond the call of patience in keeping this book on his plate for so long.

CMix: Any plans for more stories from this world? 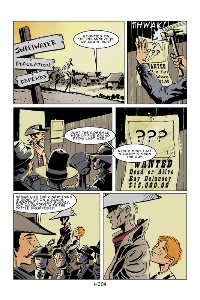 JH: If the readership demands it, I have a few other stories for these characters sitting in a folder somewhere. I didn’t think it was smart to try and write a 50 comic epic my first time out, so I kept this book self-contained. But I like the characters enough that I could do more with them if it came to it.

In any case, me and Marv are talking about doing another project right now; we’re in the plotting/world-building stage, playing email-tag.

CMix: Any other projects you’re working on?

JH: I’ve got a story in the Comic Book Tattoo anthology that Rantz Hoseley put together. Matthew Humphreys drew the story, and he just… man, he just knocked that story out of the solar system. Being a part of that whole project was kind of mind-blowing and humbling, considering the other talent in the book. It’s like 80 comic geniuses and my inexplicably-there self. Insane.

On the under-construction front, I’m currently writing a four-issue series about a kid who wrestles bears, drawn by Jorge F. Muñoz, who’s just an insanely fun artist to write comics for. It’s a short, funny and action-y book.

I’m also co-writing a hitman romantic comedy comic with Xander Bennett, whose first comic comes out this year, I think. Xander’s nice to work with, in that he’s got my sense of humor, but he’s a genius of plot structure. Whereas I just kind of throw events at the comic and hope I don’t run out of pages.

I’m also writing and drawing a sort of send-up/love letter to shonen fight comics called Brawler Land, which I’ve been working on in one form or another since high school. It’s the only project I draw, despite not, er, really being able to draw. At all.

The first issue of Grave Doug Freshley is on shelves now. Archaia Studios Press has also made sample pages of the first issue available on their website.