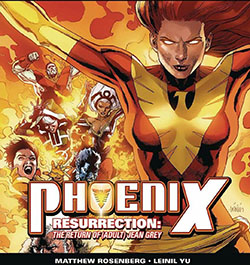 Way back in September, it was announced that Marvel was bringing back Jean Grey for the first time in thirteen years. No, not time displaced Jean Grey. No, not the reanimated Jean Grey from Phoenix – Endsong; the real fictional character. I’ve been thinking about this ever since the announcement. I’ve wanted to say something here, but I just wasn’t sure. I’ve talked privately with people whom all more or less agree with me on this to a point, so I’m finally going to say it here in my column.

I hate that they’re bringing Jean Grey back. It’s genuinely a terrible idea.

I feel terrible talking about this because the writer, Matthew Rosenberg, is a great guy writing incredible comics at publishers like Marvel and Black Mask Studios. He deserves all the success in the world. Leinil Yu is a fantastic artist. This has nothing to do with the creative team on this book; it’s about the editorial direction. It’s just plain and simple a terrible idea.

Most glaringly this transparent stunt shows off how Marvel just doesn’t know what to do with the X franchise so they’re just repacking greatest hits collections. In write ups about the move, Marvel makes statements about how it’s interesting because how will the other X-Men react to her suddenly being back? The real question is why would anyone care when we’ve already seen this done before. More than once. More than twice. That’s not an interesting or unique angle.

This also reminds everyone just how needlessly convoluted the continuity is for the X franchise. In the ads for this book they state that this is the return of the adult Jean Grey. Yes, they have to specify which version of Jean Grey is actually coming back. That is a problem. There is no other way to look at this. If you want new readers coming in, this is not how to do it. If you want lapsed readers coming back in, this is a way to remind them why they stopped reading in the first place. I’m a low hanging fruit X-Men fanboy and I will absolutely not be participating in this event. That should be viewed as a bad sign that have no interest in even humoring this concept.

I’d also like to remind everyone that Jean Grey was literally so boring and played up as a damsel in distress to the point where Chris Claremont came in with incredibly talented collaborators like Dave Cockrum and John Byrne and turned her into a space goddess. She remained so uninteresting they had to make her a villain and kill her off. 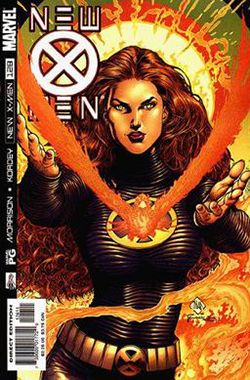 The first time she was brought back was for X-Factor in which, again, she was the least interesting team member. As characters like Angel and Iceman were fleshed out by Louise and Walter Simonson (in some of the best and lasting ways either of those characters have been portrayed), but even the Simonsons could not elevate Jean Grey to the kind of character Marvel seems to think she should be. Hell, they just started a solo, time displaced Jean Grey comic earlier this year and in the first issue they already started referencing Phoenix. That is how boring this character is, or at least how creatively bankrupt Marvel is regarding the character.

When Grant Morrison took on the X-Men in New X-Men Jean was actually portrayed with a level of depth she’s rarely been given before. She had a complicated emotional story arc that really elevated her and her death resonated. Despite all of that, Marvel has moved so far away from  the incredible work Grant Morrison did with the X-Men, even though the collected editions are constantly in print and available, still solid sellers thirteen years later. These stories have been reprinted in more formats than most other Marvel comics. It’s baffling why Marvel would move so far away from a direction that was working in favor of an over a decades long emo mutant sadness porn.

We need stakes in our stories. Stakes are what keeps the reader engaged. Why should I read this story if ultimately nothing of consequence will happen? Of course there are some exceptions, but not when we’re dealing with the heavily action based superhero genre. The characters are what keeps people coming back to these stories. Can Peter Parker pay Aunt May’s rent and stop the Lizard this month? Will we find out more of Wolverine’s past? Stuff like that.

It’s safe to say that in most situations the highest stakes for a character is that they could die. When those stakes are completely removed, as they are in the superhero genre, it makes it difficult for readers to want to pick up and read them month to month. Why am I going to care about the issue where X character dies when I know they’ll be back anyway? There is no more shock value in that and the ways characters come back from different dimensions and magic and aliens makes it hard for anyone to get too invested anymore. It makes it hard for me to get invested.

Mainstream comics have a problem, and instead of dealing with it they are actually celebrating it. People are championing (adult) Jean Grey coming back after thirteen years as something that was a long time coming that we should celebrate. Finally, she’s back! It’s about time! When I hear that, it sounds like people celebrating that their friend or loved one that’s been sober for thirteen years is finally drinking again. This is not only not the time to be celebrating, it’s also very depressing and leaves you feeling hopeless. 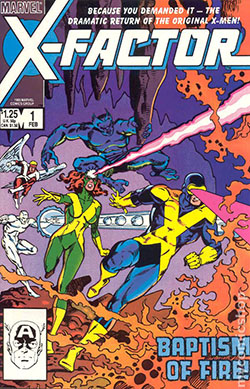 Look, I love Marvel. Really. I adore the characters, the stories, the movies, and the TV shows; I even had a Jean Grey Phoenix action figure growing up. Some of the best characters and comics ever made or that will ever be made are from Marvel. The reason I’m writing this is because I care and so do a lot of other people. The comics industry needs Marvel to succeed. I want Marvel to succeed and, in particular, the X franchise to succeed. Back in April, I wrote this open letter to Marvel regarding the direction I saw ResurrXion going in. Unfortunately it doesn’t seem to be getting better, but just getting worse and the sales numbers are reflecting that.

Remember a couple of years ago when rumors started swirling that maybe the X-Men would be put in their own mini-universe separate from the rest of the Marvel Universe? Remember how some people were genuinely excited by that idea, and were kind of sad when Axel said that wouldn’t be the case? Instances like these are maybe worth taking more seriously, because I honestly can’t fathom that approach being worse than what’s happening now and you, the reader, probably can’t either.