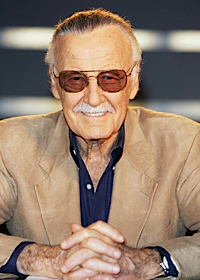 Before the discussion started, a brief video was screened showcasing Morrison’s MBX, a new motion capture cartoon that retells an ancient Indian Myth.

“I think today there’s an obsession with war,” Morrison said, as he explained that although MBX is a 10,000 year old Indian Myth, it will function as a lens through which to explore many of today’s pressing global issues.

The discussion was moderated by Sharad Devarajan, the CEO and publisher of Virgin Comics.

Morrison is known for being charismatic and engaging during discussions like this, but it was almost startling the degree to which Stan Lee’s presence overshadowed Morrison’s. Throughout  the panel Morrison gave due deference to the gravity of Lee’s body of work.

Early in the discussion Lee adopted a mock adversarial tone with Morrison remarking on his appearance, “just my luck, a guy who’s better looking and better dressed,” and following that up with a comment on Morrison’s thick Scottish accent saying, “…. you see the United Nations where they put things in the ear to get a translation.”

Early on, Lee and Morrison were asked about the effect movies were having on comics, particularly relevant given the amount of attention the film world has been receiving at a show ostensibly about comics.  Asked if he thought all comics were ripe for film adaptation  Lee said that he felt comic books make excellent story boards for movies, although Grant was more ambivalent on the matter.  Rectifying the concern that the movie industry would conquer the comic book industry.  Lee pointed out that many television and film writers are crossing over and writing comic books, “Comics are the springboard to greatness”

With the stage set, the crowd was eager and excited to hear these two discuss their past, present and future projects.  Morrison was asked whether he preferred writing in the Marvel Method, or providing his artists with a full script, “The Marvel method is quite fun,” Morrison replied, “because you don’t have to do as much work.” 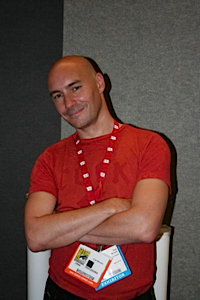 “I don’t know why they don’t call it the Stan Lee method,” Lee said in retort.

Morrison divulged that when he works with the Marvel Method he often feels compelled to rewrite his scripts to which Lee replied, “I want you to gain some more confidence.”  Lee then offered a somewhat biased opinion on his own work, “I am my biggest fan, I’ll re-read what I wrote and say, ‘Wow! That was great.'”

Morrison was asked about his work on Batman and Superman and commented that he was “…trying to take out that dimension Stan Lee put in,” essentially, Morrison credits Stan Lee with adding a level of depth to comic books that hadn’t been there before.  In his own work with Batman and Superman Morrison said he was trying to bring the characters back into more iconic versions of the characters.

Lee feigned indignity at the idea of Morrison providing an update for the character’s he created — though he did offer some genuine praise for Morrison, “guys like these have taken these characters, and these story plots, and made them so much richer.” He then reminded the audience of the advantage of creating a character saying, “They’re reading his [Morrison’s] story, and I’m getting a lot of credit.  And I don’t mind.”

As the discussion neared its midway point, the moderator fell into the background and Morrison started directing his own questions to Lee.  A more serious side of Lee emerged and he spoke with a tinge of nostalgia about the Golden Age of superhero comics.  Despite his respect for the classics, Lee explained that he felt characters were little more than there set of super-powers, or detective stories with men in strange suits.  Lee explained what he was looking for in comics was the second dimension Morrison referenced earlier.  Lee sought to create characters with a love life, hobbies, financial problems.  In a rare moment of humility Lee chalked this innovation up to, “Not knowing how to write any other way, I really couldn’t have written a detective story, I have no idea how.”

Continuing, he added that as he grew a stable of characters one of his favorite things to do was to have characters appear unexpectedly in the background of other comics.  In particular, he once had Jack Kirby draw Peter Parker and his camera in the audience at Yankee Stadium and received, “Something like 1000 letters,” from people that spotted Parker.  Lee felt that this made characters seem like they were real people, with real lives.

Shifting gears, Lee spoke about what he will be working on for Virgin Comics, teasing the audience and only divulging the smallest hint-let of information, “I’m doing something very new, very different, just keeping checking the Virgin website, every day, every week, every month,” Lee added, “just keep Virgin in your mind.”

Not one to pass up on the chance to get in a playful jab at Morrison, Lee added told the audience jokingly that, “You’ll see who’s really the guy.”  Threatening to complete outshine Morrison’s efforts.  Few in the audience seemed like they were nonbelievers.

Morrison was asked to comment why the X-Men comics possess so much staying power, and he offered the insight that X-Men is the classic story of, “A war between youth and adults,” that every generation is afraid of the changes the next generation will bring.  Waiting for Lee’s response Morrison added that he’s, “…looking at you for validation Stan, that’s all I want.”

“This is part of this man’s genius,” Lee said, “he sees things that aren’t even there.”  Shockingly, this was not a veiled reference to Morrison’s history of drug use.  From Stan’s perspective X-men was a story of good versus evil, and the power of people’s prejudices.

When asked what his favorite Stan Lee comic is Morrison mulled the question over and replied, “This Man, This Monster.” Lee agreed, modestly saying, “Oh! I like that one.”

Once again the moderator reached into his bag of generic questions and asked what Lee and Morrison read and use for inspiration With a wry smile Morrison said, “I just read tons and tons of Stan Lee comics.”

Lee reveals that he enjoys philosophy but warns that, “People don’t like to be preached to, and I love to preach,” though Lee tries to keep his personal philosophies out of comics he admitted that the word bubble isn’t completely impermeable to a writer’s true feelings.  Although, he felt that he may have gone a little far when he was using Silver Surfer as a shill to condemn humanity for wasting the precious resources that they have been given.  With a laugh he said, “Maybe that’s why Silver Surfer didn’t sell all that well.”

As the panel was nearing its end the floor was opened up to audience questions.  The first question was elicited by a particularly observant fan of the recent Iron Man and Incredible Hulk films.  He asked wether Tony Stark’s appearance at the end of The Incredible Hulk was coincidental or if there might be a third Hulk movie featuring Iron Man.

“We have a comic called ‘The Avengers’,” Lee replied.  Wether or not this constitutes an official announcement of the Avengers movie is the source of some debate between the writers of this article.

The next question came from an audience member hoping to break into the comics industry.  Asked what it requires, Morrison said, “about seven years on welfare,” and Lee added commenting on Morrison’s attire, “dressing up can’t hurt.”

Lee denied ever having regretted something he wrote.  Upon further reflection Lee remembered a time he and Kirby were working on an issue of Fantastic Four with deadline rapidly approaching and no idea.  Thinking quickly, Lee said he thought of the word Diablo, and before he could finish saying the name Kirby had already sketched the villain.  Lee, “Always regretted the fact that I cheated… that I did a story based on a name…” After not receiving any sympathy from the audience he added, “Come on, I thought someone here would at least tell me they thought Diablo was great.”

Not familiar with his bible verses, an audience member asked Lee and Morrison to perform a miracle in front of everyone, “Can you guys create a new iconic character for us right now?”

Better men than I, Morrison and Lee entertained the question briefly before concluding that it would be utterly impossible.  Also Grant pointed out, “Shouldn’t we be paid for stuff like this?”
However, that led to what may have been the biggest news of the event.  An official announcement from Lee that at some point in the near future he would collaborate with Morrison on a project for Virgin Comics.

“He’ll do most of the work, I’ll take the credit,” Stan Lee said.

“That sounds great!” Morrison said with a  smile.