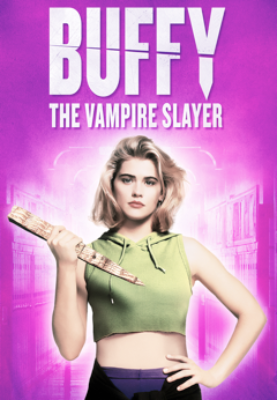 Once upon a time, a young screenwriter managed to sell a vampire film script with the absurd title of Buffy the Vampire Slayer. What no one realized at the time was that this amusing romp would evolve into a cult television series that would make stars out of the cast and turn the screenwriter into an acclaimed writer/director of television, feature films, and comic books.

But what was there in that little summer film from a, gasp, quarter-century ago? No surprise here, this month 20th Century Home Entertainment wasn’t going to let its anniversary slide and now have the Buffy the Vampire Slayer 25th Anniversary edition for consideration.

While the Joss Whedon script shows flashes of the wunderkind he was to become soon after, here, his subtle touches are mashed by director Fran Rubel Kuzui, who didn’t seem to share his sensibilities. Instead, she seems more accustomed to the Japanese style of film where she has largely toiled ever since. The necessary mix of geek humor and outright horror seemed beyond her skills to pull off effectively.

The film featured Kristy Swanson as Buffy Summers and was supported by Donald Sutherland, Paul Reubens, Hilary Swank, David Arquette, and Luke Perry in their attempt to save California from Rutger Hauer and his demon horde. If you come to this fresh, knowing only the show, there’s a lot that changed. Buffy on film is a senior and Giles is a mysterious stranger named Merrick Jamison-Smythe. What may seem familiar is Buffy was your stereotypical airhead/cheerleader who has to grow up in a hurry to accept her destiny as the Slayer. While Joyce on the show was a loving, supportive mother, here, Mom (Candy Clark) is a distant, neglectful influence.

The 1992 release came and went without much of a ripple in the zeitgeist so this is an interesting misfire of a cultural artifact. A better interpretation of Whedon’s intention would be his Dark Horse graphic novel, Buffy: The Origin, which he considers more faithful and canonical.

It’s a fairly tepid celebration with no new extras, just a nice high definition transfer and a digital HD code.