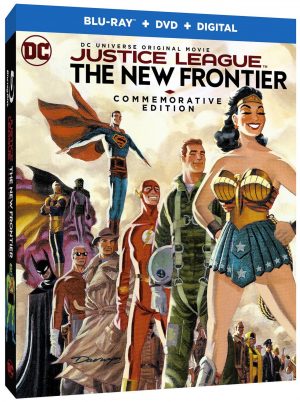 While Warner Animation and Warner Home Entertainment celebrate ten years of DC Comics adaptations with next month’s 30-disc set, they are also spotlighting one of their best efforts with the current release of Justice League: The New Frontier – Commemorative Edition in a steelbook.

Based on Darwyn Cooke’s 2004 acclaimed miniseries, the 2008 animated adaptation received an 8/10 here at ComicMix. The 75-minute story deserves a fresh look and it’s a loving tribute to Cooke, who died in 2016, leaving behind a fine legacy. Directed by Dave Bullock from a script by Cooke and Stan Berkowitz, the largely faithful story is a loving tribute to an earlier era when heroes needed courage first, powers were secondary.

While the characters hail from the first days of comics’ Silver Age, the story is a fresh take, involving an alien entity known as The Centre, threatening all life of earth. With each feint and direct attack, men and women rise to the challenge, some demonstrating powers and abilities far beyond those of mortal men. J’Onn J’Onzz (Miguel Ferrer) reveals himself a Martian while Wonder Woman (Lucy Lawless) comes from Paradise Island to participate in the world’s defense. Bit by bit, the heroes band together so you have the birth of the Justice League, but we also have the Challengers of the Unknown, the original Suicide Squad, Dinosaur Island, the Losers, and others making an appearance.

You have to watch this to absorb all the Easter Eggs and marvel at Cooke’s deft ability to make each character recognizable and distinct. This is action-packed and perhaps one of the best adaptations over the last decade. No doubt, Cooke’s involvement guarantees that. The vocal cast, anchored by Jeremy Sisto, David Boreanez, Neil Patrick Harris, Kyle MacLachlan, Phil Morris, and John Heard is one of the stronger assemblages of talent.

What is new, though, is Retro Action Cool: The Story of Darwyn Cooke where friends and colleagues talk about Cooke the creator and his legacy. Many get emotional talking about their departed friend, especially Art Director Mark Chiarello, who found his work in an editor’s slush pile, and offered to get him published. It’s nice that Cooke’s work for IDW’s Parker adaptations is featured in addition to his DC material. And in a welcome touch, you actually get some interview outtakes that humanize the earnest talking heads, especially DC co-publisher Dan DiDio.

If you missed this then, get it now.