Before I go into this week’s column, I wanted to acknowledge the passing of Carrie Fisher. Mere hours after my column went up last week it was reported that she had passed. It was truly tragic for her family, friends and legions of fans whom include myself. Rest in peace, Carrie Fisher.

Last week I picked Love Is Love, the joint DC Comics and IDW publication to raise money for Equality Florida benefiting the victims of the Pulse Nightclub mass shooting. I had written about this book’s announcement back in September and how it filled me with pride that this was happening, but that comics still has more to do towards creating stronger queer inclusion. Now that the trade is out and I got the chance to read it, I have more to say. 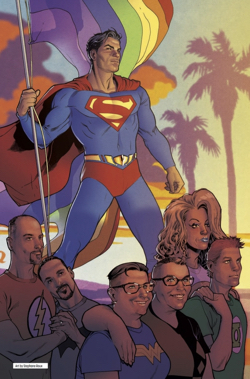 This charity project organized by Marc Andreyko was originally a joint project with DC Comics and IDW. As of last month, Archie Comics added itself to the mix and included two separate Kevin Keller stories for the anthology, one by Kevin Keller’s creator Dan Parent. We get a short comic featuring Chalice from AfterShock’s  Alters. The Will Eisner estate even gave permission to use The Spirit for a comic in the anthology as well. All of that combined with an introduction by director Patty Jenkins and you have an anthology with more star power and support for a cause than I, at least, have ever seen before in comics.

Love Is Love opens with an “In Memoriam” page with the names and ages of all 49 victims from the Pulse Nightclub mass shooting. It’s then clarified that this is an IDW publication with editorial and related services provided by DC Entertainment. Following that is Patty Jenkins introduction then nonstop one or two page comics and illustrations, followed by Marc Andreyko’s afterward and a plug for Equality Florida. 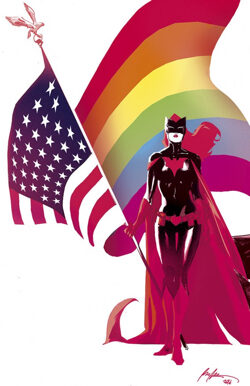 While I was aware of quite a few of the people who were working on the project, there were plenty in the book I had no idea were in it up until I read their contributions. Stories from people like Dan Didio and Brian Michael Bendis. Dan Didio is someone whom members of the queer community were upset with after his mandate that characters including Batwoman could not get married. While I personally wasn’t as upset by this decision as some people were, I did understand it.

Brian Michael Bendis is someone who I’ve met, admire, and is at least somewhat responsible for getting me back into comics with the launch of Ultimate Spider-Man back when I was in high school. One area I’ve been critical with him on is his handling of Iceman being retconned as gay. While this was out of ignorance and not malice, it still made it hard for me and others to get interested in Iceman again. Now with Sina Grace on board, a queer man and another contributor to Love Is Love who contributed a great personal two page comic, I’m more than happy to give Iceman a shot again.

Two other contributors I were aware of who have had mixed responses from the queer community as of late are Paul Jenkins and James Robinson. Paul Jenkins is the creator and writer of the AfterShock comic Alters with Leila Leiz and Tamra Bonvillain. For his contribution to this anthology, Paul did a two-page story about the trans character Chalice with Tamra Bonvillain and Robert Hack illustrating instead of Leila Leiz. It’s a two-pager about how irrelevant those oppressing the queer community are becoming and it’s a positive message. The series at AfterShock has received some criticism from people in the comics community, including myself, concerned with trans representation in comics and how the character could potentially have a negative impact. 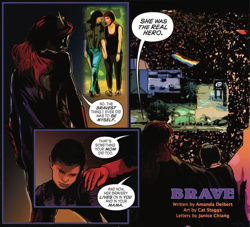 While I had qualms with the first issue in particular, Paul Jenkins has since been using the back of each issue to have a conversation with a trans person and to stress how important using proper pronouns are and other topics people in the cis community need to be more educated on.

James Robinson is a writer whose previously been nominated for a GLAAD award for his thoughtful portrayals of queer characters in comics and has been writing queer characters in his comics since the 90s. Back in the summer of 2015, James had gotten backlash over his treatment of trans people in his pseudo-autobiographical comic Airboy with Image comics. After a couple of days of online onslaught, James Robinson released a thoughtful apology. Further reprints of Airboy #2 have been edited to make it less offensive.

What do Dan Didio, Brian Michael Bendis, Paul Jenkins, and James Robinson all have in common? That despite the fact that in their long careers they’ve had at least one instance where readers questioned their portrayals and handling of queer characters, they showed up to volunteer and dedicate their time and talent to help the queer community during what’s easily one of the communities darkest times in modern American history. Allies are important, and actions do speak louder than words. And although they may have had missteps, they showed up when it counted the most and that needs to be recognized and celebrated.

While it is important to highlight allies, I would feel horrible if I discussed this anthology without highlighting more of the queer contributors. Mainstream queer talent like Phil Jimenez, Sina Grace, and James Tynion IV offer us autobiographical looks at their life and how being queer impacts it. Although Howard Cruse isn’t a contributor, he’s the subject of Justin Hall’s comic along with Howard’s beloved husband Eddie Sedarbaum. Steve Orlando gives us a touching one page comic about a queer family. Trans comics creator and journalist Emma Houxbois, an important voice whom I admire, has a touching one page comic about how important places like Pulse are to the queer community.

There are far more queer contributors in this book and I wish I could spend time talking about all of them. Two other allies I’d like to mention, Jeffrey Burandt and Sean Von Gorman, created a one page comic with public domain superhero Rainbow Boy where they save Rockbar from a bunch of Spider-Haters. Rockbar is a bar here in the West Village that I frequent fairly regularly and it’s great to see them being represented.

Love Is Love is not just an important milestone in comics history and a loving tribute to the queer community that will help benefit them, it’s also just good comics and a fun read. It took a great deal of time and a saint’s patience for Marc Andreyko to get this book from a desire to see the comics community come together after the Pulse Nightclub mass shooting and the over six months that followed for it to hit the stands. We should all be grateful for Marc’s kindness and generosity as well as the dozens and dozens of contributors that made this book possible.

At $9.99, there really is no reason not to pick up this full-length trade paperback. If you didn’t pick it up last week, please pick this up when you grab your comics this week.