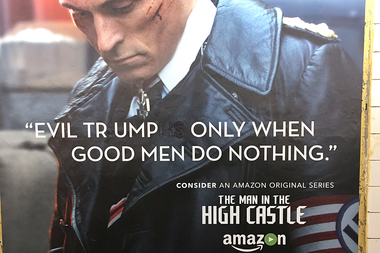 I am in an incredibly shitty mood. My mom had a stroke—well, not technically, but the results are the same and she ain’t doing so good. My dad is a soul trapped in a useless body lying in a nursing home. On top of that wonderfulness, last night I couldn’t get the pizza I wanted because my favorite place closed and my two fallbacks were closed—huh? Isn’t New Year’s Eve one of the busiest nights of the years for pizzerias?—so I ordered one from what seemed to be the only one open and it totally sucked, but I still pigged out on it. Pigging out on something you enjoy is one thing, but pigging out on something that isn’t really that good? Dumb, dumb, dumb. And also, unlike some people who eat when they are upset, I’m one of those who don’t, so why I wasted $10.00 on something I really didn’t want in the first place I can’t answer.

And then there’s the reality that in 19 days a man who is the most incompetent, the most dumbest (and please, no letters on my grammar), a man who is treacherously close to crossing the line to treasonous behavior—just what the hell does Putin have on him?—will become the 45th President of these United States. We are about to go from the classiest to the assiest.

I don’t think so.

In other news, I recently finished watching Season 2 of [[[The Man in the High Castle]]], brought to you courtesy of Philip K. Dick (whose original book was published in 1962), Frank Spotniz (The X-Files), and Amazon Studios. For those not in the know, the premise of both the book and the series is: “What if the Axis powers had won World War II?” Well, that’s a simplification—there’s a lot more in there, particularly concerning not just alternate realities, but the nature of reality itself—but for the purposes of this column, it will do.

What is interesting—and somewhat depressing, as if I needed any more help in sliding down the ladder—is the reaction of some to the series, which, to tie it up with a bow, is: “Who needs a fictional fascist dystopia when the reality is already here?” I get it.   Doing some research for today’s column, I came upon author (The Name of The Rose) and philosopher Umberto Eco’s 1995 essay, “Eternal Fascism,” in which he lists 14 “properties of fascist ideology.” I won’t list all of them—I suggest you look them up, if you have the stomach for it—but there’s enough here to make me shiver:

And here’s an example of some of the tweets that The Man in the High Castle elicited, courtesy of The Huffington Post:

Donald Trump living high atop the Trump Tower or Man in the High Castle?

Who needs The Man in the High Castle when America has already freely elected Donald Trump, our very own fascist?

And my personal favorite, from Indiana University School of Public and Environment Affairs PhD candidate and Brookings Institute alum Dave Warren, on December 22, 2016:

Just got to that episode of Man in the High Castle where Donald Trump is elected President of the United State of America.?