Marc Alan Fishman: Where’s Superman When We Need Him?

This morning (I prep my stuff on Tuesday) I flicked on my Facebook feed to see a pair of news stories — real ones — that caused me to sincerely take pause. The first was vapid enough: Internet D-Lister Tila Tequila sieg heils at an Italian eatery. The second one, a bit less oh who cares, denoted that a room full of white nationalists (a.k.a. “The Alt-Right,” a.k.a. fucking Nazi Klansmen) had a conference ending with their leading ideologue declaring that Jews may be “soulless golem” amongst a litany of other unabashed hate-speech. For the first time in the wake of the presidential election, I actually took a breath to be floored — save only for Tuesday the 8th when Donald Trump was declared the winner of the highest office in our nation. 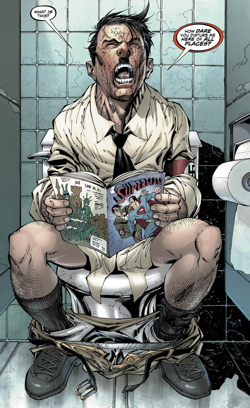 And my only thought that came into focus was… Where’s Superman?

You see, Superman was created by a pair of Jewish children from Cleveland, born of immigrant families. Their greatest creation was (and still remains) a bit of a nod to the Jewish struggle. Kal-El, an alien born to an alien land was rocketed to safety as an infant by his parents who were unable to leave their land. He was a hero denied his homeland, granted amazing abilities that would separate him forever from those he would live and love on his adopted planet.

To be clear: Jews don’t have superpowers, save only for their amazing ability to control Hollywood, the media, and all global economies. But I digress.

The truth of the matter is I’m not oblivious to the world around me. But I’m certainly privileged, self-absorbed, and mostly invisible to the real hate that exists. In my own life, I’ve personally never been anything but celebrated for being Jewish. I grew up in a nice community where Jews were plentiful… all things considered. When I moved to Indianapolis for college, I saw bits and pieces of a different swatch of America, but, again, never once did I feel like my religious identity was truly ever under attack.

Please denote again that this was all from my sheltered, suburbanite, self-absorbed viewpoint.

Here and now, with swastikas swathed across my feed, my eyes squinted at the seething idiocy of it all. By all accounts, Tila Tequila is a waste of atoms. My only knowledge of her comes from the blurred memories of promos for some off-kilter reality show or two. That she has recently turned heads by being a Hitler apologist, pro-Trump, sieg heiling what-have-you? Only screams for a need for attention. When one’s relevance dies out, I suppose this is one road you could take to stop your declining fame.

The National Policy Institute, as run by the aforementioned Hitler youth, causes me no small amount of undesired stress. While Richard B. Spencer was only amongst 200 or so supporters in Washington D.C. when he decided to quote Nazi propaganda in the original German and liken my kin to animated clay statues, the fact that it has risen up the viral flagpole and ignited both pro and anti-movements is what leaves me clutching pulp and ink for solace. Mr. Spencer and his ilk are emboldened by our President-Elect and his appointment of Steve Bannon as a chief advisor. The King of the Alt-Right Internet sounding board (Breitbart.com) is now a stone’s throw away from the man with the nuclear codes. How could that not put a bit of pep in the step of the white-power movement? Even if Trump denounces them… actions speak louder than words. And Bannon is in. Christy is out.

It helps when one builds his election on locking up one’s opponent, erecting walls and disenfranchising immigrants, banning others from entering our country based on their religious beliefs, and generally winking and nodding at being a randy rascal who grabs attractive women by the kitty cats. But. I. Digress.

I never imagined that over the next four years— as my two sons begin to understand more about the world in which they live — that I would need to explain hate the way I’ll have to. When I was in Hebrew school and learned about the Holocaust, I was told of the devastation it caused within my family. My grandmother’s entire hometown was massacred. Much of her family did not survive. That personal connection was numbing. But, again: I lived in a nice suburb where The Holocaust was saved for special movies and solemn history lessons.

Modern-day civics had nothing to do with that kind of hate. That kind of hate had been pushed to the fringes of society, and me and my Jewish brethren were thriving. And now? Internet celebrities and fascist sycophants are being given headlines on CNN and round-the-clock coverage. Hate is now covered for ratings. Hate is now part of the zeitgeist.

And once again… I ask where is Superman now?