John Ostrander: Siddown and Shut Up! 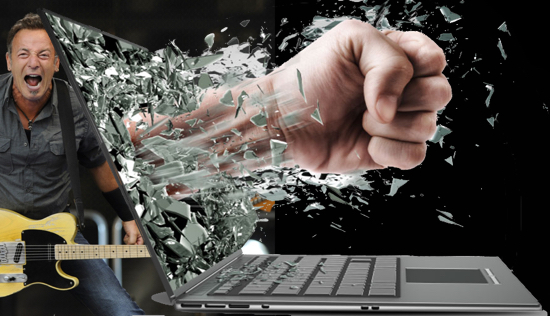 There has been a bit of tension since the surprise victory of Donald Trump on election night. There are many on the Left who are vociferous in not liking or accepting the outcome, and there are plenty (not all) on the Right whose attitude appears to be “We won, you lost, get over it.”

A couple of incidents stand out. Vice-President Elect Pence attended a performance of the musical Hamilton on Broadway. Some of the audience booed him and, during curtain call, the cast read a (I thought) polite letter explaining their concerns about the upcoming Trump/Pence Administration. I’ve seen objections that doing so was rude, out of place, and (in the opinion of the President–Elect) it needed an apology. There are those on the Internetverse who evidently believe that politics have no place at a Broadway musical; Pence was there to be entertained, not lectured, and the cast should just sing their little ditties and behave themselves.

Some Trump supporters declared they were going to boycott Hamilton, a feeble threat in that a) it’s theater and they wouldn’t be caught dead in a live show, b) it’s sold-out for the next two years, and c) Hamilton is already a political statement, using a variety of musical styles (including hip-hop) and color-blind casting.

I’ve seen different artists have also made statements either on Facebook or Twitter, including Sarah McLaughlin and Bruce Springsteen, and have been verbally pummeled by trolls. I saw one posting regarding Springsteen that said he should just sing his little songs and shut up. Did this person ever listen to Springsteen? There are those who think that the song Born In The U.S.A. was a nationalistic or even jingoistic anthem. They might have listened to the chorus, but they ignored the verses.

Art is not merely there to entertain you. Art is meant to challenge, to show different perspectives, to introduce new ways of thinking and feeling. The best way to open a mind is through the heart and art is the best way to do that. A closed mind comes from a closed heart.

A song, a drawing, a story, a dance, a touch of theater – these can all open heart and mind. It’s why authoritarian regimes always look to control and dictate the arts, to turn it into propaganda; the arts are dangerous. They should be. That’s part of their value to society. They can challenge established notions and perceptions, in small ways as well as large.

Some of the more virulent responses to artists dissent on Trump that I’ve seen are disdainful. They denigrate the artist and the work. “Siddown and shut up!” they seem to say. “Our side won and we don’t want to hear it! We don’t want to put up with whining little babies!” Some even go misogynistic suggesting those that don’t support the manly Trump are bitchy little girls. (Yes, I’ve seen that, too.)

These are all examples of cyber-bullying. They seem to believe they can make others shut up. They’re predictable, they’re pathetic, and it won’t work. The bullies don’t get it; this is what artists do – they speak up, they challenge, they question. It’s in the DNA. Donald Trump will need to grow a thicker skin and not get into Twitter wars with musicals, Saturday Night Live, and stand-up comics. He won’t win and he won’t look good losing.

The next four years are going to be interesting.