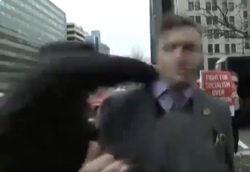 This week’s heart-stopping controversy revolves around the question “is it ever okay to punch a Nazi in the face?” Such an occurrence happened during the Trump Coronation in Washington last Friday and of course it was captured by news outlets and smartphoners alike. And of course the footage went viral – much as the Nazis themselves did in the 1930s.

Comic books have been beating on Nazis since the invention of the staple, so one might think there wouldn’t be much controversy within our particular donut shop. During WWII, there was no greater Nazi-beater than Captain America – it pretty much was his raison d’être – so it is slightly surprising that the current writer of Captain America (indeed, both Captains America), Nick Spencer, said beating on Nazis is wrong. “… cheering violence against speech, even of the most detestable, disgusting variety, is not a look that will age well.” 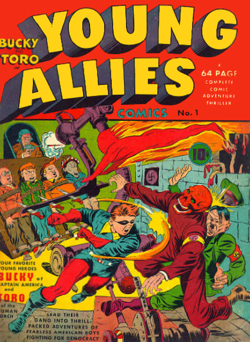 Hmmm. That begs the question “is violence a form of free expression and, thus, entitled to First Amendment protection?” I think that’s a fascinating discussion, although I wouldn’t want to go to court on it. It’s definitely a “whose ox is being gored” affair.

On the other hand, we have writer Warren Ellis, no slouch when it comes to writing superheroes and a genuine clever bastard in the Ian Dury sense of the term. He said on his website “… yes, it is always correct to punch Nazis. They lost the right to not be punched in the face when they started spouting genocidal ideologies that in living memory killed millions upon millions of people. And anyone who stands up and respectfully applauds their perfect right to say these things should probably also be punched, because they are clearly surplus to human requirements. Nazis do not need a hug. Nazis do not need to be indulged. Their world doesn’t get better until you’ve been removed from it. Your false equivalences mean nothing. Their agenda is always, always, extermination. Nazis need a punch in the face.”

Far be it of me to paraphrase Mr. Ellis, but I think once you strip away the elegance what he’s saying is “They’re fucking Nazis, you morons!”

I see his point. And I agree with it. Yes, it’s illegal – hit somebody in the face and you risk going to prison. Some things are worth that risk, and if all you’re doing is punching a Nazi in the face, you just might be working for the greater good of humanity. Besides, a few generations ago we used to shoot them. 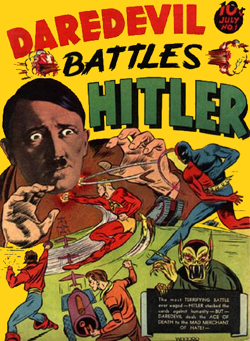 I don’t have to tell you everything the Nazis stand for, but to mention just a few items they stand for genocide, methodical elimination from society, torture, global domination and Fascism. Please note, I’m referring to Nazis and not to “radical Islamists.” The fact that today’s Nazis use their philosophies to justify anti-Islam activities is confusing, but Nazis lack perspective.

An important aside: We tend to conflate Nazism with Fascism. They are two different things. Whereas all Nazis are Fascists, not all Fascists are Nazis. Many Fascists do not engage in genocide and they seem to be of two minds about torture. They define global domination in strict business terms, and they are actively engaged in nation-running to benefit such domination. They particularly like to work from the “inside circle” of a charismatic government leader’s cabinet. Yesterday’s munitions maker just might be today’s casino operator.

I understand why some teenagers are attracted to Nazism. It’s simple, it’s tribal, it’s brutal (hey, there’s a difference between punching people in the face and hording them into gas chambers), and, damn, they do dress well. But lucky for us, if good art direction was what it took to win a war, we’d all be goose-stepping today.

Back in the 1970s we tried hitting assholes in the face with pies. It didn’t work: we still got Nixon and Reagan and Cheney and Trump. We were so wondrously naïve back then. Punching alt-right leaders in the face might not stem the tide of Fascism in the United States, but maybe it’s a start. It sure beats bullets and bombs.