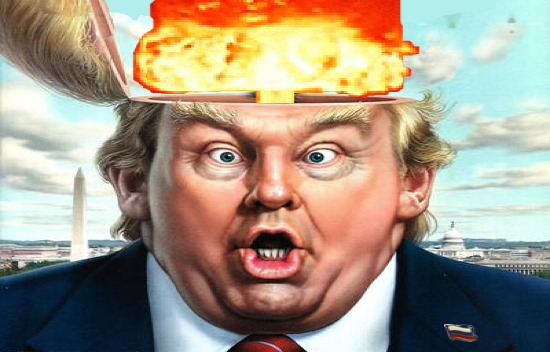 I’m almost ready to give up. Throw in the towel.

I’m a writer of fantastic fiction. That’s been my bread and butter for over 30 years. Folks that fly. Folks that travel through time. Folks that live in multi-dimensional cities. Bad folks doing bad things for ostensibly good causes. And so on and so on.

For all that the stories and characters have been fantastic, I have to keep them in some ways real. I don’t want to have the readers say, “Oh, that could never happen.” I don’t want to have an editor say, “Oh, that could never happen.” Or “That’s ridiculous.” Or “Who do you think you’re kidding?” The stories need to be at least plausible in some way.

Or so I thought until this political season.

Yes, I’m going to use the T word. Trump.

If Trump did not exist, if I had simply made up him and his candidacy, I could never have sold his campaign for president. I don’t think I know an editor who would have bought it except as some wild political satire. It would probably have been dismissed as a product of my fevered liberal brain.

Reality has… trumped me.

That happens now and then. When I first proposed my idea back in the 80s for a Suicide Squad revival, of saying that the government would get supervillains to do covert missions is (supposedly) in the National Interest, there was some concern that the premise was a little too out there. In between the time when the Squad proposal was accepted and the first issue was published, Irangate hit. (For those who are too young or too old to remember, Irangate or The Iran-Contra Scandal occurred during the second Reagan administration where the White House sold some weapons to Iran (which was under an arms embargo) and used the money to fund the revel Contras in Nicaragua which had been prohibited by the U.S. Congress.)

In short, reality trumped me back then as well.

When Donald Trump declared himself a candidate for President, I thought it was a joke. I thought he was a joke. After all, he ran before and went nowhere.

Now? Now he’s the Republican nominee for the highest office in the land and the most powerful person on the planet.

I think that’s a notion that American Horror Story could do a whole season on.

He has done and said things that would have sunk any other presidential candidate in memory. Just this week he praised Vlad Putin, the dictator of Russia, and even went on Russian TV to praise him and disparage President Obama. That was too much even for Bill O’Reilly. I’ve watched countless Republicans in high positions who had to answer questions about it and looked like they were going to vomit in their mouths. They usually mumbled something along the lines of “I support the Party’s candidate.”

Look, I make no bones and no apologies for what I am – liberal and decidedly anti-Trump. I’m not nuts about Hillary Clinton and, frankly, I think if it had been almost any other person who was the Democratic candidate, they would be crushing Trump. I think, and hope, that she will in the end. All that said, I cannot conceive that Trump will win this. I keep telling myself it’s not possible but, on the other hand, I never thought he would get this far either. I do not understand the appeal. I understand there’s a lot of anger out there and a lot of people are fed up with Washington but – c’mon! You seriously want the nuclear launch codes in Trump’s hands?

If this wasn’t what we laughingly call reality, there’s no way I could have sold this concept, this story, to an editor.

If The Donald wins the election, we’ll have an additional definition for the word, “trump.”

As in, we’ve all been well and truly… trumped.