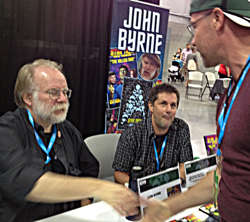 Fans, creators, actors, historians, licensees, NASA and even the United States Post Office celebrated Star Trek’s 50th Anniversary last week at Manhattan’s Javits Center during Star Trek: Mission New York. This convention was a triumph of Geek Culture and how one man’s vision inspired so many others to create one of the most successful and enduring entertainment franchises.

Star Trek fandom has always been passionate and vocal. They’ve banded together to keep the Enterprise flying and have been holding conventions since the 70s. This convention, created by Reed Elsevier’s ReedPop division, was held in the same location as their New York Comic Con. That’s become such a behemoth that, by comparison, Star Trek: Mission New York seemed to embrace a more intimate vibe.

There are benefits to a smaller convention. This was so much easier to navigate than New York Comic Con. There were shorter lines and no crushing crowds. Fans were in a better mood. But try as I might, my observations of this show are undoubtedly influenced by other trade shows and fan-focused shows. And there were a lot of shows this past weekend. Convention expert Rob Salkowitz analyzed the “so many nerds, so little time” phenomenon for Forbes.

Panels: Where the Fans Are

The heart and soul of the convention seemed to be in the panel rooms, even more so than at a conventional trade show or comic con. These panels allowed fans the opportunity to explore the many niches of Star Trek in intense and personal ways, despite sitting in a room with 400 other people.

When I left for college, my dad suggested that it would be wise to join a group or team as a way to break down the overwhelming scope of the university. He was right – and the advice would have been appropriate for Star Trek fans that weekend.

A few of the most fascinating panels included: 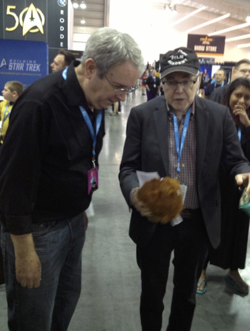 Creative and clever cosplay clearly was a theme at this show. Pattern manufacturer Simplicity’s booth spotlighted their licensed Star Trek patterns, but the real creativity was with the fans. Some highlights: 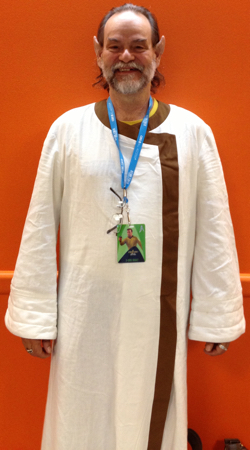 The exhibition floor offered an eclectic group of booths and activities. On one end, NASA’s huge booth helped fans understand upcoming space exploration, (like the Tess satellite) while on the other end, the U.S. Post Office sold the new Star Trek stamps.

In between there was a mix: 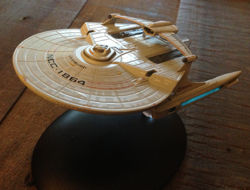 Rod Roddenberry is the son of Star Trek Creator Rod Roddenberry. Rod carries on the business side of the work that was established years ago as his father, with prescient insight, kept many of the licensing rights.

Rod’s an affable guy. He’s warm, humble and friendly. And he announced an astounding project. It turns out that his father maintained a warehouse full of dailies and outtakes from the original series. Gene Roddenberry had gathered up everything that was on the metaphorical cutting room floor and preserved it. Working with Roger Lay, Jr., Rod and the new team have assembled these treasures in the Star Trek: The Roddenberry Vault, on sale later this year. 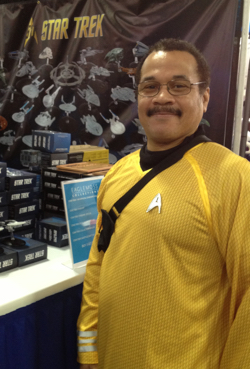 For every Wrath of Khan or ST:TNG, there’s a Nemesis or a Star Trek: Enterprise. There were some shortcomings with this convention too.

After 50 years of merchandise, collectibles, comics and books, I was disappointed that there weren’t any dealers selling those treasures in any meaningful way. I had gone into the show on the lookout for vintage Trek comics and books but left empty handed. I wanted to see things like Topps cards, Ben Cooper Halloween outfits and 70s Star Trek guns that fired little plastic disks. I hadn’t planned on buying any of those things… but you never know.

My frustration was compounded when I asked the woman in the information booth if there were any dealers or back issue sellers. She informed me that she “had no idea” but that I “was welcome to wander around the exhibition floor” to try and find what I needed. I was, quite frankly, stung by the impoliteness and uselessness of that suggestion. That’s not the Reed Expo Customer Service that I remember.

The whole exhibition floor was a bit underwhelming, but on the other hand, it seems that companies with product designed for fans sold a lot this weekend. There wasn’t a crushing competition for consumer dollars.

Years ago, I had enjoyed a Star Trek novel now and again, so I was really surprised how unwelcoming the Simon and Schuster booth was to new or in my case, lapsed, readers. I went to that booth planning to purchase a book, but after a sour experience, I decided against it. My to-read pile is tall enough, anyways.

And there’s so much more going on in the “world” of Star Trek fandom that I wish was front and center at this convention. I wanted to learn more about the many Trek podcasts, the high quality fan-films and the boom in impressive fan artwork. 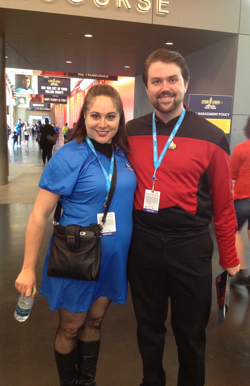 Last week, The New York Times had a front-page article on changing movie going habits and this summer’s box office sequels that didn’t become hits. I was surprised to see Star Trek: Beyond on that list. I had thought it made its money back and I had enjoyed the picture. But maybe I shouldn’t have been surprised – the faithful superfans at Star Trek: Mission New York had all but ignored that movie.

The Next Frontier: 50 More Years

What’s the real magic of Star Trek? Is it the hope for an optimistic future? Is it the smart science fiction? Is it the ripping yarns? Is it really just the story of a guy and his buddies? Who knows? I’ll leave it to deeper thinkers to sort that all out. All I know is that Star Trek fan culture is thriving. It’s a robust intersection of fandom, commerce & entrepreneurialism. And that a good time was had by most at Star Trek: Mission New York.