Suicide Squad – The Big Reveal (Not A Review, Seriously!) 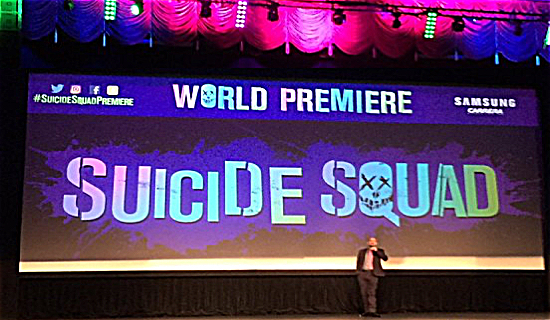 This is not a review of Suicide Squad, the latest movie that pisses off the critics. John deserves first crack at that, and you’ll see it in his regular space here at ComicMix this Sunday. And Arthur does his weekly review thing, and I wouldn’t usurp his turf. And I’ll bet our pal Robert gets a few comments in well before the home video release. Yeah, I’ll offer a few opinions here, but after reading the inner-most thoughts of so many of those professional movie reviewers I feel a strong desire to pull the bedsheet off of the painting.

Here’s the bird’s eye lowdown: the professional movie critics are sick and tired of superhero movies. Be warned – no matter what’s up there on the screen, the critics have wandered out of the theater in search of Elvis. Capes and cowls are crap. Enough is enough. Screw you, Robert Downey Junior.

Suicide Squad is not the Gone With The Wind of superhero flicks, and after Batman v Superman and The Killing Joke, it probably seems better to me than it should. Yeah, there’s too many people in it: without them, you can’t establish a squad. There’s one completely unnecessary supervillain plotline, which seems to be the hallmark of recent DC-based adaptations. Big deal. Suicide Squad belongs to three of the most compelling characters in contemporary comics: Harley Quinn, Amanda Waller, and The Joker. And The Joker is only there to establish why Harley is Harley – and Harley is… complicated.

Here’s my big review: if you pull the stick out of your ass before it, and you, plump down into your popcorn-littered seat, you just might have fun.

Suicide Squad the movie is fun. It’s not Deadpool type fun, although the first DC/Marvel movie crossover should be Harley Quinn Meets Deadpool. Yeah, I don’t think that will happen either.

If you’re a movie critic or a professional Internet crank, “fun” doesn’t pay the rent. Critics’ vitriol should be measured the way most guys measure their penis, confusing inches with millimeters. The genre is not done. The genre has been with us since Douglas Fairbanks Senior first donned Zorro’s mask. Costumed heroes are a movie staple. If the earth didn’t open up and swallow those theaters playing Batman v Superman, the genre is safe.

Pick up a newspaper. Read about Donald Trump. The zika virus. ISIS. Killer cops. Hurricanes and tornados. Mongo crashing into Earth. After all that, trust me, Suicide Squad is a fun movie worthy of your time and your need to relax after all that heavy lifting.

Superhero movies have been with us for 100 years and, whereas the current fad will lessen eventually, they will be with us for the next 100 years.

Critics: deal with it.