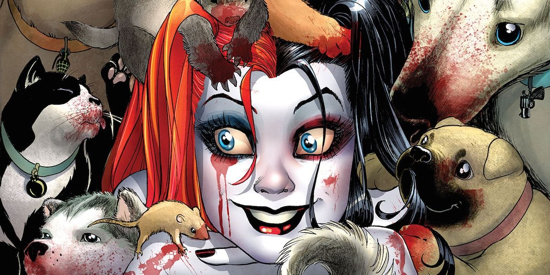 On August 1, the Suicide Squad movie premieres in NYC and I’ll be there. I’ve watched the trailers and the hype and, I must say, I’m hyped up. From everything I can see, David Ayer (the writer/director) and the cast have read my work on the Squad comic and are using it. Viola Davis as Amanda Waller especially seems pulled from what I did and for me personally that’s very exciting.

I don’t expect the film to be a direct translation of the comic; this is a different medium and has different needs. I love my fans a lot but there’s not enough of them to fill a single theater for a week. The movie has to appeal to those who never heard of the comic. However, in its DNA, this is the Squad I created. At its core is the concept of The Dirty Dozen with supervillains. That was my concept. Amanda Waller was my creation. So – yeah, that’s my Squad up there.

The Squad as a comic and I suspect as a film will also reflect, to a certain degree, some of my sensibilities. The main one will be the moral tones of gray. For a long time, despite being in four colors, comics were very black and white. There were Heroes (white) and Bad Guys (black) and the Good Guys beat up the Bad Guys. Comics were very primal in their Good Vs. Evil.

I don’t see things like that and I don’t write that, especially with the Squad. With the Squad, the bad guys are forced to “do good,” with that “good” defined by Amanda Waller who herself is morally very gray. Even the “heroes” who went along to keep the Squad in line were themselves compromised morally, often just by being associated with the Squad. They had their own problems. No one was 100% good – or 100% bad either.

That’s how I see people so that is how I must write them if I am to write honestly. Shakespeare has Hamlet say

I am myself indifferent honest;
but yet I could accuse me of such things that it
were better my mother had not borne me. . .

I think that’s true of all of us. We are all only indifferent honest.

I can go that route as much as anyone. I really don’t like Donald Trump and I’m not prepared to reconsider it. I don’t understand people who are in his corner; I find him to be a dangerous megalomaniac. However, my job as a writer to to find a way to understand him and his supporters. Where is something like them, like Trump, in me? If I wanted to write a Trump-like character and not make him just a cartoonish buffoon (well, any more of a cartoonish buffoon than he already is), I have to find those parts of myself that resonate with him, with them.

Once, in Wasteland, I wrote a story from the perspective of a serial killer. I wanted the reader to identify with him, to find out where he lived in them so first I had to find those points in myself. That took me to some very creepy places but, I think, the story worked. From what I’ve read, Jared Leto felt he had to do something like that to play the Joker in the Squad film. It’s a weird contradiction – you have to use empathy to create a character without empathy. And then I ask the reader to go there as well.

Ultimately, with the Squad stories I wrote, I asked the readers to identify with the villains. As Will Smith’s Deadshot says in one of the trailers, “Don’t forget – we’re the bad guys.” If the film works (and I think it’s going to), it will ask the audience to identify with these “bad guys” – just as we did in the comic.

Hopefully, we will all be uncomfortably entertained.