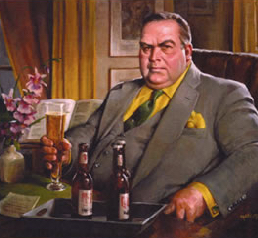 I’ve heard it said that old friends are the best friends. That makes sense to me. Over time, you’ve shared experiences together, both good and bad. You’ve grown to know each other, to know the little idiosyncrasies that make up who we are, that make the bonds between us.

You can form that kind of relationships with books as well, especially series. The first time you read the book, it’s to discover the story, to learn what happens next. As you return to it, or read another book in the series, it’s because you want to revisit them.

For example, for me every new book in The Number One Ladies Detective Agency series by Alexander McCall Smith is like a new visit with old friends. I know the characters, the main ones and the wide supporting cast as well, and I want to learn what is going on with their lives. There are surprises in each visit, to be sure, but I now know the locale and what these people are like, I know their foibles and their virtues. They do grow but they are still the same characters I know and love.

As I mentioned in a recent column, I’ve been re-reading the Nero Wolfe mysteries by Rex Stout. There’s a lot of them – Stout started the series in the 30s and ended the run only with his death in 1975. In all, there are 33 novels and 39 novellas in the canon. It’s been so long since I’ve read most of them that most of the time I don’t really remember what the mystery is or whodunit.

However, I don’t really come back for the mysteries – I come back for old friends, principally the great detective, Nero Wolfe, and his intrepid assistant, Archie Goodwin. They’re a great team – Wolfe is the armchair detective, the great mind in the tradition of Sherlock Holmes. Archie is the wisecracking modern semi-hard boiled detective in the tradition of Chandler’s Phillip Marlowe. (Archie also is our narrator in all the stories and he’s a damn good one.) Their relationship, their repartee, is what drives the series.

Wolfe has many well defined idiosyncrasies: he keeps religiously to his routine, never leaves his brownstone in New York if he can help it, is a gourmand (and looks it; we’re often told he weighs a seventh of a ton), cultivates orchards, is a misogynist, is paranoid about traveling in any vehicle (convinced that the vehicle at some irrational moment will kill him), loves big words and knows how to use them, and is almost terminally lazy. If Archie wasn’t there to badger him. Wolfe would probably never work at all.

Part of Stout’s way of shaking up the series is to occasionally put Wolfe in very uncomfortable positions, usually involving his being obliged to leave his dwelling. One of Wolfe’s immediate objectives invariably is to find a chair that cannot only hold him and bear his weight but in which he feels comfortable and secure; not always an easy task.

In the fifth book of the series, Too Many Cooks, Stout inflicts many indignities on Wolfe from the start. We begin with the great detective on a train; if you know Wolfe and his horrors of travel, you already know how much this will bother him. He and Archie are traveling to West Virginia, to a well known resort where fifteen of the top chefs from around the world gather for a special banquet where Wolfe will be the guest of honor and the main speaker. Needless to say, one of the chefs winds up murdered and Wolfe, if he ever wants to get home, will need to solve the case. So far so good and very entertaining.

That said, there was something that took me aback as I read it. At this resort, the staff are all African-Americans, and there is a casual use of racial slurs by several characters, including Archie. Other nationalities also get ethnic slurs used with them but, with the African-Americans, the slurs carry with them the whole bigoted attitude that those words embody.

The book was published in 1938 and will, as most pop culture, reflect the society and attitude of its day. That said, it was still startling and somewhat off-putting to me. I don’t expect something written back then to reflect sensibilities more prevalent today. I am not and never was someone who expected the word “nigger” to be excised from Huckleberry Finn.

Still, it did catch me by surprise. It’s an attitude I hadn’t seen in my old friend before and didn’t expect to find it here. I wasn’t sure I wanted to finish the book.

I did and I’m glad I did. At one point, in order to solve the mystery, Wolfe needs to question the black staff, the cooks and the servants, together. And this is where Stout provides an admirable twist. Wolfe treats them as individuals and with respect, and so does the author. They have names, they have separate identities and characters, different outlooks and goals and ways of talking. One waiter is working at the resort to put himself through Howard College. There are no “niggers” in this group. They’re people, individuals, and that’s the point Stout makes. In a book published in 1938. I find that remarkable.

This is not to paint Wolfe as a civil rights champion. He is not. Wolfe (Stout?) is an undeniable misogynist and that may be a subject for a column at some future date. Wolfe is also ruthlessly pragmatic at times and, in this case, he needs information. However, he doesn’t allow blind prejudice, such as Archie demonstrates, to get in his way of solving the murder. That being said, Wolfe treats the men as men.

It is nice when you find that your old friend is who you thought they were, whether that old friend is living or fictional. Well done, Nero Wolfe. Highly satisfactory.