My old friend Danny Fingeroth has nothing to do with the subject of this column, at least I don’t think he has, but we are at the beginning and, you never know maybe some absolutely brilliant idea will occur any second now, an idea with Danny’s name graven on it in fiery letters as big as the cosmos, in which case, I guess, that’s what’d I’d write about. 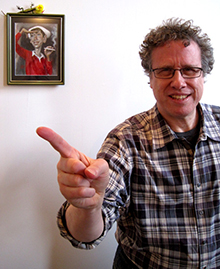 Okay, to hell with you, idea.

And onward. I wanted to get in touch with Mr. Fingeroth because he often knows things I don’t and I wanted to fact-check myself on an assignment that I blew (I think) but I don’t care to scramble names/dates and such. We are, by thunder, in the truth telling business here, citizens (and therefore are not qualified for a job in politics. We’ll live with it.) The immediate problem here is, I want to telephone Danny and people don’t always instantly answer emails and so communication by computer is iffy, leaving the alternative of the phone. But I’ve misplaced Danny’s Rolodex card. Just like me!

Do we have a topic yet, or are we just blathering?

Okay, if the cupboard is bare open the pantry. 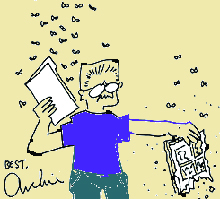 What I was hoping to get confirmed by the encyclopedic Mr. F was an article being prepared by another magazine, the ancient kind made of paper and ink (though I do think it has a web presence and don’t I wish that Dan was here to confirm that?!) The editor of this publication was seeking anecdotal information about deadlines and, having been dueling with deadlines on and off since I was a wet-behind-the-ears journalist back in southeast Missouri I thought, sure, I can knock out volumes of copy – both pro and con – about deadlines, so clear the way to the computer!

But I didn’t. One reason might be that, as a general policy, we don’t sling mud in this venue and the ripest of my deadline tales would entail doing just that. Sure, I could and would omit proper nouns or use pseudonyms but my readers are extremely astute and would effortlessly see through such a paltry stratagem and probably think less of me for trying to perpetrate it. And the most egregious deadline flaunters, well…I’m sure others have stories, too, and don’t need mine.

Not that I myself am completely innocent in this matter. I once thought I was and mentioned this in a conversation with the late and beloved Archie Goodwin who was my editor at the time. Archie gently rectified me. I was, indeed, a chronic deadline misser. I always got assignments done in time to keep their dates with the presses, but I was not as prompt as, living in a fool’s paradise, I believed I was. I was, in short, a dumb cluck.

And here we are almost 500 words into whatever this is and still no topic. Feh! And cluck cluck cluck!