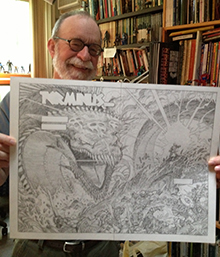 In 1977, the Syracuse Post Standard blazed the headline “Comic Book Confab Listed” to announce the second Ithaca Comic Convention. Actually, I think it would be more appropriate to say they whispered the headline. It was scrunched in the middle of a crowded page. The article listed professional comic guests such as Walter Simonson and Al Milgrom. I’m not one-hundred percent sure if that’s how my family found out about that second Ithaca Comic Con way back then. It may have been from seeing a flyer on the bulletin board at Fay’s Drug Store. That used to be a legitimate marketing venue too. But the big takeaway is that back then, the concept of a comic-con certainly wasn’t understood.

Today’s comic conventions and “cons” are part of the nation’s everyday lexicon. Any gathering gets a little extra oomph by adding “-con” as a suffix. Every Comic Con held anywhere in the country gets a modicum of respect and “Comic-Con International” (commonly referred to as San Diego Comic-Con, or simply SDCC) is right in the center of pop-culture radar. 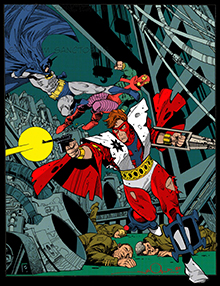 It was at that Confab in Ithaca that I first met Walter Simonson. I was already a big fan. His Manhunter in Detective Comics, written by Archie Goodwin, had made every fan sit up and take notice. At the time of the convention, he was illustrating a black and white Hulk magazine story that told lost tales of the character’s early days in the Marvel Universe. It was called a continuity implant back then, but I simply realized it was a fresh, outstanding story. I was elated to meet the guy drawing it at this Ithaca Comic Con.

You know how sometimes we meet our cultural heroes and they are really jerks? We spend all this time worshiping a celebrity’s accomplishments, only to have it all come crashing down when they reveal an unappealing side to their personality in a personal meeting? We all have probably experienced that type debilitating letdown. 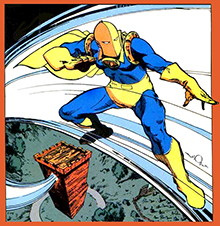 Well, meeting Walter Simonson was the polar opposite of that. He was kind and patient with me and to everyone there. He was a big talent wrapped in a smile wrapped in supportive enthusiasm.

It’s no one wonder he’s still often referred to as ‘the nicest guy in comics.”

”You will hear similar stories from many comics professionals,” said J.C. Vaughn of Gemstone and The Overstreet Comic Book Price Guide. “Walter Simonson was the first comic professional to talk to me one on one as if I were an actual person. Never mind that he’s Walter Freakin’ Simonson, one of the greatest comic artists to walk the planet; he’s also Walter Simonson, a genuinely good guy (we could use more of both). To hire him (twice!) to do covers for the Guide has been a joy, real wish-fulfillment stuff.” 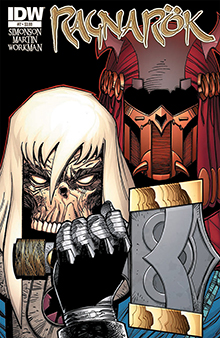 More recently, I met with Walter and his wife Louise at his home to discuss his latest project, Ragnarok. It’s a fantastic IDW series that reimagines the Norse legends, including Thor, in a completely different setting than the Marvel version. He used the phrase “Norwegian Zombie” to describe it.

And reinforcing his humble nature, he’s quick to point out two of his collaborators on this project: Laura Martin and John Workman. 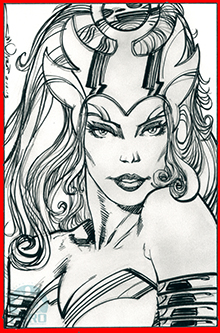 During this visit, Walter showed me pages of issue #10. This is a moving issue that explores the distortion of a brand. Basically, Thor finds the symbol of his hammer is being used for something rotten. Where are the trademark and licensing lawyers when you need them?

As with so many Walt Simonson stories, it’s full of power, action, and majesty. But my favorite moment was at the story’s finale when a woman is kneeling and we, as the readers, have a view of the soles of her feet. It’s a usual image for a comic, for whatever reason, but rendered with care and love. “I had to ask Weezie to pose for that,” laughed Walter. He meant that he needed to ask his wife Louise to serve as an artist’s model in order to render the character’s feet correctly.

Let’s talk about Louise Simonson for a moment. She’s quite an impressive creator. Like Walter, she’s humble and soft-spoken. That’s especially impressive as she has every right to be boastful and proud. Her accomplishments are many, but I am always struck by her kind and gentle manner. I’d tend to think that she’s a huge part of the Walt Simonson mystique. Any man married to a woman like Louise Simonson would clearly want to do his best each and every day. 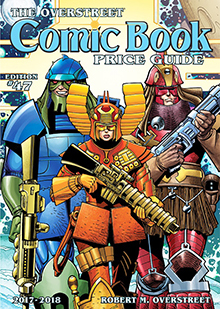 Plus: she made a mean breakfast when I visited. We really must devote another column to this fascinating person at some point down the road.

Walter also revealed a bit of his own personal background and how it influences his latest series. He spoke to me about his family history in North Dakota, and the wheat farms of the 1800s. There seemed to be a sense of adventure about it all and a respect for the “giants of the earth.” His parents even kept an extensive library that contained a few mythology books from the 1890s. The lessons of this all stayed with him well into his years learning design at the Rhode Island School of Design.

He summed up so much of his background and learning in his mantra for storytelling, “Play by the rules, but still surprise.” 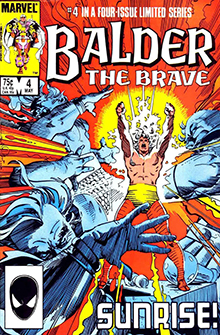 This week at the San Diego Comic-Con, publisher IDW has a clever marketing promotion centered on Walt Simonson. Lucky fans will be having dinner with Walter, receive two of the enormous and lovingly crafted IDW Simonson books, get them autographed, and receive a sketch or two. Not surprisingly, the unique event quickly sold out.

I asked IDW’s Director of Special Projects, Scott Dunbier, to speak a little about Walter. He offered a clever and genuine response: 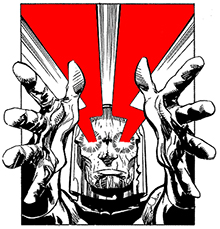 “What can I say about Walter Simonson that hasn’t been said before? Blah blah blah legendary creator blah blah blah brilliant run on Thor blah blah blah nicest guy in comics. Sure, all those things are true. But best of all, I get to work with him and talk to him on a regular basis. I’ve got a great job!”

There may be another big night at San Diego Comic-Con for Simonson. The Eisner Award Committee has nominated him for the Hall of Fame. To be fair, there are many other deserving creators on that impressive list. I have no idea how the judging actually works, but I certainly wish him luck.

This week Walter and Weezie will be at the epicenter of pop culture at the San Diego Comic-Con. And I’m sure they’ll continue to inspire many more people.