Martha Thomases: Black Panther Is Back And… 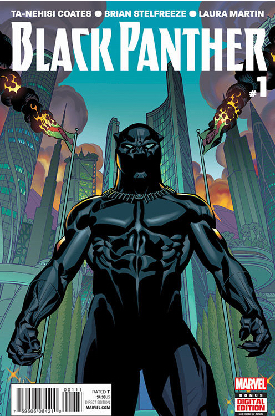 When I went to my local comic book shop on Wednesday morning, I did, as always, chat up my buddy on the other side of the counter. “Did you read Black Panther yet?” I asked him. “Is it any good?”

“My editor wants me to write a review, and I’ve never read any other Black Panther comics,” I said.

Okay, I doubt that’s true. There have been comics with the Black Panther in them for five decades now. The character wouldn’t be used if he didn’t have a fan-base. That’s capitalism.

Speaking of, this new run of Black Panther has been getting tons of publicity. Marvel has done a terrific job, getting write-ups in The New York Times, The Washington Post, Wired, among others. That’s because the writer is Ta Nehisi Coates, the National Book Award winning author of Between the World and Me, a book that changed my life. 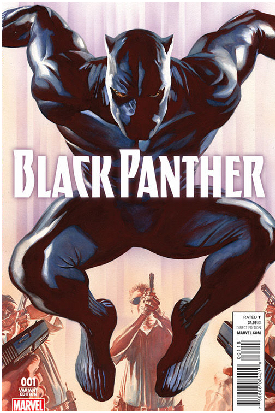 Between the World and Me was not written for me. It was written for the author’s son and, more broadly, for other African-Americans. That was one element that I found so refreshing when I read it. I don’t think this new Black Panther series is written for me, either. The only white faces I saw were in ads for other Marvel comics.

The story opens as T’Challa, the Black Panther, returns to the country of Wakanda, where he is king. In his absence, the country has been attacked, invaded, upended. His sister, who ruled in his absence, has been killed. His own people attack him, no longer trusting him to take care of them.

I found this opening to be confusing, perhaps because I’m a new reader. In the letter page, Marvel offers a link to their website with more information but the link wouldn’t open for me, and I had to rely on the Wiki.

This issue sets up the elements for a complex story of family relationships, warring political factions, the burdens of leadership and the quest for freedom. So far, I’m not too sure who T’Challa is or why he can’t speak directly to his people. I don’t like his mother. I don’t like this guy named Tetu, who tells a woman that what she feels “… was the agony of labor, Zenzi. It had to be done. It was the agony of birthing a new nation.” Because really, we needed him to mansplain childbirth to us. 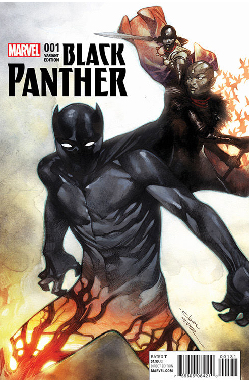 I liked the two women who defy the law to be together and help people. I hope they have more to do in future issues, and that we see T’Challa interact with more characters who have names.

Brian Stelfreeze has done a glorious job with the artwork. He manages to create scenes that are moody and exuberant at the same time. Laura Martin’s color work amplifies and expands the atmosphere. Wakanda feels like its on another continent, maybe even another planet, a mix of ancient tribes and technological wonder.

Coates’ first script is remarkably solid. He doesn’t rely too much on captions or exposition, letting the artwork carry the story.

He might just have a future in this writing business.