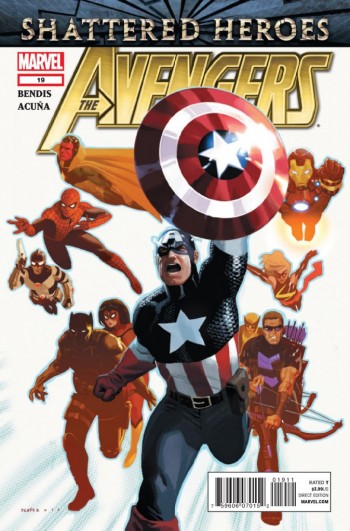 Perhaps the oddest thing about the Avengers property becoming Marvel’s flagship title the last few years is that there’s no underlying concept involved in its execution. It’s Marvel’s biggest superheroes (and some of its stronger supporting characters) teaming up to take on various super-baddie threats… and that’s really about it, as far as I can tell. It’s not a family, it’s not a community, it’s not a certain way of doing things; it’s everybody the fans think are cool put into the same room. In a similar vein, the writer Brian Michael Bendis recently announcing the conclusion of his run with that property surprised only in that there’s little in the way of a dramatic arc — at least not one I can see, from several steps back — that would indicate he was close to wrapping up whatever personal, creative business he might have brought to the series several years ago. In most ways that count, the defining characteristics of this comic book series lies in how it resists past signifiers. For all that it defines the current superhero mainstream, Avengers is one contrary comic book.