Mindy Newell: For Kim And John, From The Heart 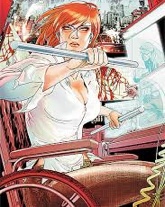 So Saturday, I’m sitting in the kitchen, my feet up on the table, sipping my morning tea, and flipping through the latest edition of Entertainment Weekly. It’s the one with Hugh Jackman on the cover as Wolverine, dated May 31/June 7 2013.

I’m on page 32, the “Monitor” section, and there’s nothing there really of interest for me, a headline splashing a “Bieber Backlash” – about time – and an announcement under “Splits” that Robert Pattison and Kristen Stewart of Twilight fame have broken up again – duh, I saw that one coming once the last fanfare of Breaking Dawn was done – and then I see a little inset on the bottom left that boldly reads “turn the page and open the flaps for EW’s pick of the 25 greatest superheroes ever” (with “plus the 5 worst” in a shaded grey, and a little arrow pointing to a big advertising spread for a TNT show called Hero.

Hmm. Didn’t see this listed on the “Contents” page. Must be like one of those Easter eggs that some videos have.

So nat’ch I open the flaps and there it is. Very cool, and a nice surprise.

The copy explains that when picking this list EW decided to “specify which version of the hero stands out above the rest,” so that “some icons appear here more than once.”

I like that, it’s a bit different, and with 75 years of superhero history muddying the waters (Superman first appeared in Action Comics #1, June 1938) along with who-can-count-the-number-of-reboots in that time, I think it shows respect for our beloved genre.

So here’s their list, in ascending order, of the greatest superheroes of all time, with a bit of EW’s reasons why:

4. Iron Man: Robert Downey, Jr., 2008. “…tack on the aching wisdom that Downey’s age (and eyes) – oh, and may I add here his pure, unadulterated sexiness – brings to the role and you have the fully charged heart of the Marvel movie universe. ”

5. Superman: Christopher Reeve, 1978. “…most memorable was his playful take on alter ego Clark Kent, depicting him as the meek, benign bumbler” – well, they almost got this one right. Reeve simply was Superman.

Okay, this is getting into dangerous, possible plagiarism territory here (plus it could very possible piss off editor Mike), so let me quickly go down the list without the, uh, word-for-word copying.

7. Batman: Christopher Nolan, The Dark Knight Trilogy, 2005 – 2012. Made everyone forget everything that came after Michael Keaton. Hey, I thought Keaton was great, so stick in it your ear! Although, imho, Pfeiffer still beats out Hathaway as Catwoman.

9. Black Panther: Don McGregor, Rich Buckler, Gil Kane, Billy Graham, Klaus Janson and Bob McLeod, “Panther’s Rage,” Jungle Action #6 – #24, September 1973 – November 1976. Marvel’s first graphic novel, even if it did appear in serialized form. Dwayne McDuffie said of it on his website: “This overlooked and underrated classic is arguably the most tightly written multi-part superhero epic ever. If you can get your hands on it . . . sit down and read the whole thing. It’s damn near flawless, every issue, every scene, a functional, necessary part of the whole. Okay, now go back and read any individual issue. You’ll find seamlessly integrated words and pictures; clearly introduced characters and situations; a concise (sometimes even transparent) recap; beautifully developed character relationships; at least one cool new villain; a stunning action set piece to test our hero’s skills and resolve; and a story that is always moving forward towards a definite and satisfying conclusion…and [they] did it in only 17 pages per issue.” Okay, I’m copying again.

I’m going to tighten this up even further, because there’s a big surprise coming, and it’s something that mean a lot to me…and to someone else here at ComicMix.

And here is the one that made me sit up, rush to my computer and send off an e-mail to John Ostrander, my dear friend and fellow columnist here at ComicMix.

In 1988, Barbara Gordon, aka Batgirl, was shot and paralyzed by the Joker in Alan Moore and Brian Bolland’s Batman: The Killing Joke as he rampaged against everyone connected to the Dark Knight. Although the graphic novel was a brilliant take on the Joker (which, imho, vastly influenced the late Heath Ledger’s portrayal of the villain) and was critically acclaimed, the controversy of the victimization of Barbara Gordon really upset the fans – particularly the women.

Including Kim Yale, John’s late wife, a wonderful writer and editor, and the best friend this writer ever had.

Well, let me have John tell it, from an interview with Vaneta Rogers on Newsarama dated September 7, 2011:

“My late wife, Kimberly Yale, and I were not crazy about how Barbara was treated in The Killing Joke,” comic writer John Ostrander told Newsarama. “Since the Batman office had no further plans for her at the time, we got permission to use Barbara in Suicide Squa, [another DC title at the time]. We felt that the gunshot as seen in Killing Joke would leave her paralyzed. We felt such an act should have repercussions. So…we took some of her other talents, as with computers, and created what was essentially an Internet superhero – Oracle. “

It so perfectly made sense. Barbara had been established as a PhD. in library science, so Kim and John used that basis to make Barbara the ultimate computer hacker. As Oracle, she was the “go-to” person for any hero in the DC universe needing information; it was a natural progression for Denny O’Neil (yep, our Denny), who was the editor of Batman family editor at this time, to incorporate Oracle as the woman to whom the Dark Knight turned when he sought aid on the computer.

This is a nation that talks the talk about recognizing the value of everyone’s capabilities but rarely walks the walk. This is a country in which Senator Max Cleland, who lost both arms and a leg while serving in Vietnam, lost his seat to a man who got out of serving in Vietnam (“bad knee,” he said in one interview) by claiming Cleland did not support his country against Osama Bin Laden. This is a country in which the comic book industry is filled with muscle-bound men in spandex able to leap tall buildings in a single bound and sexualized women whose bubble boobs enable them to fly.

But this is also an industry that gave us Oracle, who was Batgirl, who was the target of madhouse clown, who was paralyzed, who forged on ahead and demanded our respect.

Thanks to two writers named Kim Yale and John Ostrander.

(Mindy will be back in this space Wednesday afternoon.)