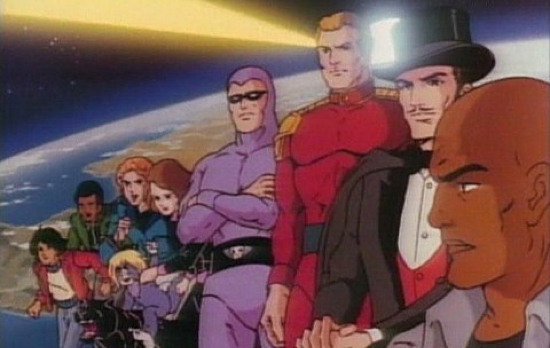 As many of you know, Nancy Reagan recently passed away at the age of 94. Her legacy, as well as her husband’s, invoke incredibly powerful emotions from both ends of the political spectrum. We’ve been reminded of that this past Friday. Some of you reading this may not be aware of Nancy Reagan’s connection to comics. It’s a very loose connection, don’t get me wrong, but it’s there. I’ll try not to embellish this connection to avoid having the townspeople show up at my doorstep with pitchforks and torches in hand.

Anyone aware of the Reagan’s and life in America in the 80s knows of Nancy Reagan’s “Just Say No” campaign, which, ironically is my stance on the Republican Party today. What you might not be aware of is back in September of 1986, Nancy Reagan was greeted by members of the Defenders of the Earth including Flash Gordon, The Phantom, Lothar and Mandrake the Magician. No, not the “real” Flash Gordon, The Phantom, Lothar and Mandrake the Magician. They were merely actors portraying the characters on a five-day coast-to-coast tour to help kids say no to drugs. I imagine the real Defenders of the Earth were too busy saving us all from Ming the Merciless to tour the country themselves. 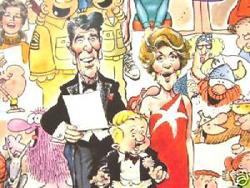 At the time, Defenders of the Earth was a cartoon produced by Marvel Productions in association with King Features Entertainment. King Features owned the above mentioned comics properties used in the cartoon. They added a bunch of kids to the mix to make it more relatable to them (I guess) and in turn we got a cartoon that was good enough for one season. In that one season we got the episode titled “The Deadliest Battle”. The deadliest battle, of course, was against drugs.

Yes, drugs. In this episode, Rick Gordon (Flash Gordon’s son) is being pressured not only by school to make good grades, but by his father to be a better hero. Randomly, a suspicious juvenile at Rick Gordon’s school offers Rick drugs unsolicited and for free in the middle of the school’s busy hallway. I can’t quite tell if that was a lack of understanding on how these things happen or a cynical assumption that kids would actually be that stupid. Anyway, we then have a scene in a classroom with a teacher going over D.A.R.E. which stands for drug abuse resistance education. We even get a nice shout out to Nancy Reagan with the teachers saying, “Just say no.”

Rick takes the drugs anyway which do in fact make him feel a whole lot better, but it comes at a high price. The drugs also make Rick absent minded, causing him to forget to finish setting up their new defense system. This allows Ming the Merciless to come right in to take out the Defenders of the Earth once and for all.

After Flash Gordon uses some excessively harsh words with his son, one of the other kids on the team is able to help save the day and teach Rick a valuable lesson about responsibility and how it’s never okay to take anything that will get your mind off of how the walls of your life are closing in on you.

Flash Gordon does at least acknowledge that he’s been too harsh with his son Rick, which was a nice touch. I was expecting something that put the entire weight of the drug problem on Rick and the dealer.

If it wasn’t for Nancy Reagan, we might have never been able to experience this animated gem. If you want to experience it for yourself again or for the first time, you can check it out here. Many other cartoons also tackled drug prevention at the time including Thundercats, He-Man, Jem and the Holograms, and many others. And the drug war legacy still plagues us to this very day. However, Nancy Reagan didn’t meet with the Thundercats, or He-Man, or Jem and the Holograms. When she got a chance to meet the heroes to help kids say no, she chose comics heroes. Or her scheduler did. Either way, when she wanted help getting her message to kids she met with classic comics heroes that have stood the test of time to this very day. To some of us at least.

Did Nancy Reagan’s “Just Say No” campaign help people? Maybe a few. Did it give people a false sense of security and a cramp in their arms from patting themselves on the back too much for doing something about an issue that over time ended up destroying countless more lives than it ever saved while also wasting an unbelievably large amount of our taxpayer dollars?

You bet! Maybe she should have asked the Defenders of the Earth to help end the Cold War instead.