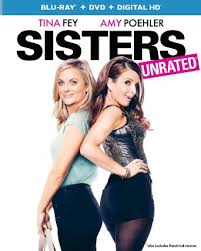 Humans appear to be hardwired to resist and even reject change. With that as a starting point, the amiable but not terribly original Sisters, starring Tina Fey and Amy Poehler. Their alchemical bond makes this a slightly above average film and watchable but the without them, the film is familiar and flabby.

The film, coming to home video Tuesday from Universal Home Entertainment, kicks off when parents Dianne Wiest and James Brolin) tell Tina and Amy that they are selling the home where the girls grew up. While volatile Kate (Fey) was expected to take the news badly, it’s somewhat of a surprise that responsible Maura (Poehler) is equally bothered by the change to the status quo.

In an incredulous moment, the girls arrive in Orlando to clean their rooms one final time, just hours before the contract is about to be signed. In our world, the process takes weeks so this feels unconvincing.

In another bizarre version of reality, they decide there’s time for one final blow out of a party and the old gang is invited, allowing the girls to become teens once again, especially as old flames Dave (John Leguizamo) and Alex (Bobby Moynihan) turn up. When Brinda (Maya Rudolph) is not invited, she decides to ruin the nostalgia fest and so goes the rest of the film.

Given the quality of the people involved, including Rachel Dratch, Samantha Bee, Kate McKinnon, Jon Glaser, and Chris Parnell, in addition to the often funny Poehler, Fey, and Rudolph, this should have been more than a house party gone awry. Fey and Poehler have varying producer credits so they should have sharpened the derivative script from Paula Pell, who has done better work on Saturday Night Live and 30 Rock.

The film was handed to Jason Moore who made a mark in features with the brilliant Pitch Perfect so this is a huge disappointment from him and his cast.

The Combo Pack comes with the Blu-ray, DVD, and Digital HD package. On the Blu-ray you can find a full range of extras starting with a slightly longer and no better unrated version of the film. There are nine deleted scenes and another nine extended scenes plus a Gag Reel (3:17). As one would expect, there was a lot of adlibbing during production and the best takes were compiled for The Improvorama (8:40) while How to Throw a Party (1:36) offers up advice. More interesting is the Grown-Up Parties Suck (5:18) featurette that is exactly as it sounds. Bobby Moynihan gets the spotlight in outtakes called The Alex Chronicles (2:51) and The Kate and Pazuzu Chronicles (2:05) focuses on flubs from Fey and WWE star John Cena. You can learn the Behind the Scenes story during the interesting but short A Teen Movie…For Adults (10:26). The Original Sister (6:40) allows writer Pell to reveal how much of the film was taken from her relationship with her sister Patti. Finally, Pool Collapse VFX (0:50) looks briefly at the set piece.

There is also Audio Commentary from Moore, Fey, Poehler, and Pell that makes the film sound far more ambitious and interesting than what was actually screened for audiences.