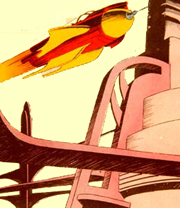 creator Alex Raymond is not in the opening credits. Hell, he got better (far better) treatment in that campy movie from 1980. Say what you will about that movie, compared to this waste of time that movie was [[[Citizen Kane in Outer Space]]].

Second tip-off: No rocketships. Rocketships are not “dated.” In fact, we launched one into space with a whole bunch of people in it right when this show debuted. Doing Flash Gordon without rocketships is like doing The Lone Ranger

Third tip-off: They only refer to Dr. Zarkov by name once in the 90-minute pilot and once in the subsequent episode. That’s crazy. Dr. Zarkov is to Flash Gordon what Dr. Watson is to [[[Sherlock Holmes]]].

Mind you, if there were a real Hans Zarkov, he’d sue. The real Zarkov was a genius; this guy is a bumbling fool. The real Zarkov was driven mad by the fact that he could save the Earth from destruction but had no way to do it; once Flash appeared on the scene and they got to Mongo (in their rocketship!) he got better.

Fourth tip-off: No longer merciless, Ming is a dick. He’s about as threatening as [[[Garfield]]] after a place of lasagna. I understand they wanted to update the character – these guys should have taken a cue from the way Russell Davies updated The Master on Doctor Who

. Ming wouldn’t even make it as a member of George Bush’s cabinet, and from the first (and for me, only) 150 minutes of the series, he’s not even that competent. Plus, he looks about seven weeks older than his daughter.

So here’s my question. Why the hell did these people pay King Features for the license? They could have saved themselves a bundle and called this limp and lame pile of fly-feed “Bill Jones.”

If you’re a fan of Alex Raymond’s Flash Gordon or of the 1930s serials, avoid this teevee waste like Chinese toothpaste.