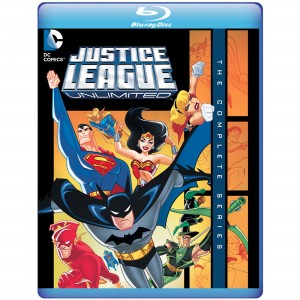 Every time a four-color property moves from print to other media, changes are made, mostly a result of the different medium being employed. Sometimes the changes stagger the imagination while others are subtle and acceptable. Warner Animation has more often than not been incredibly faithful to the source material, resulting in some of the most satisfying comics-to-screen adaptations.

As a result, the anticipation for a Blu-ray release of the excellent Justice League Unlimited has been high and finally, last week, Warner Archive released the show in a three-disc collection. The series, which ran July 31, 2004 – May 13, 2006, is the follow-up to the equally wonderful Justice League.

While the original series focused on the traditional original members of the JLA, the new series expanded its roster to just about every hero from the DC Universe. For many viewers, it was the first time they were exposed to many of these colorful characters. For we fanboys, it was a sheer thrill to see the obscure (Aztek) to the fan favorite (Doctor Fate) finally make it to television. 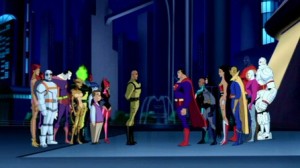 The episodes were entertaining and were largely standalone as we saw varying combinations of heroes go into action while the backgrounds were filled with cameos galore. The orbiting headquarters felt like a club for heroes, a chance for them to relax between fights. There was the occasional meta-arc such as the shadowy Project Cadmus (thank you Jack Kirby) and the how-could-they-not Secret Society of Super-Villains.

Thankfully, the series benefitted from a stellar array of voice actors who brought verve to the characters, anchored by Kevin Conroy’s Batman but scanning the credits its fun to see who was popular in geekdom when the shows were produced. Today we see Morena Baccarin on Gotham but back then the Firefly actress was also busy voicing Black Canary giving her deeper ties to DC Comics. And Adam Baldwin double-dipped in both well cast parts as Hal Jordan and Rick Flagg. 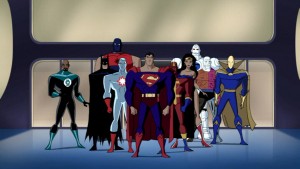 What we didn’t know was that this would be the final series set in the expanded, semi-interconnected animated universe and we can look back on those shows with great fondness and boy, do they hold up well. Credit for that starts with Bruce Timm and Alan Burnett, aided and abetted by an army of writers, artists, and animators. It helped tremendously that comic book veterans were recruited to pen episodes, so the adaptations were less jarring.

Some of the best loved comic stories made it to the screen, such as J.M. DeMatteis’ adaptation of Alan Moore’s “For the Man who has Everything”. And the animated series did not shy away from some mature themes, such as drumming Huntress out of the league for attempting to kill a man, regardless of her justification. Hawkgirl’s return, after betraying her teammates in the previous series, is back and has to deal with the repercussions of her actions. The stories span time and space, switching from action-packed to light-hearted to downright romantic. It also tied up loose ends from other series in the brilliant “Epilogue”, which closed out the second season, touching on Batman: The Animated Series, Batman Beyond, and the JLU.

The transfer to high definition is clean and crisp with excellent sound. The special features which appeared on the previous DVD releases are back here including creator’s commentary on the episodes “This Little Piggy” and “The Return”; “And Justice for All”: a featurette on the process of revamping the series with new characters and a new creative direction; “Cadmus Exposed”: Mark Hamill and series creative personnel discuss this popular series story arc; “Justice League Chronicles”: The series’ writers, producers and directors discuss their favorite moments among final season episodes.

If you haven’t experienced these you should. If you watched them previously, you want these.