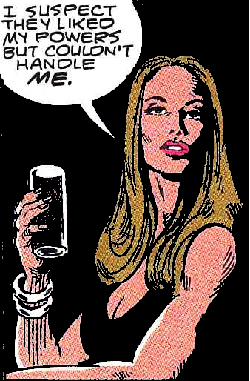 Last week I met with my friend Kelsey to get a tarot reading. I brought along my copy of Rachel Pollack‘s Arthur C. Clarke award winning novel, Unquenchable Fire, to lend to her. Beyond being a novelist, Rachel Pollack is a well-published authority on tarot, a transgender woman who tackles the subject in her different works, as well as having written comics.

She wrote Doom Patrol for two years following up on Grant Morrison and Richard Case’s popular run on the series over twenty years, when it moved from DC’s main line to the Vertigo imprint. Her run built on the bizarre nature of Grant’s image while creating new characters.

The most important of which was Kate Godwin, a.k.a. Coagula, DC’s first – and to date only – transgender superhero, with the power to coagulate liquids and dissolve solids at will. Prior to joining the Doom Patrol, she tried out for the Justice League, and it’s implied that she was rejected in part for being an out transgender lesbian activist, brandishing a pin on her jacket stating, “Put a Transsexual Lesbian on the Supreme Court.”

Rachel Pollack was able to use the character of Coagula to discuss trans issues and to inform readers who were unaware of these issues as to what it means to be trans. She even crafts a brilliant moment in storytelling where a transcendent being requires the strongest example of a man and a woman, and Robotman and Coagula are the man and woman the best personify those genders, driving home the fact that a trans woman is a woman. Period.

So decades before the biggest and most active push for more diversity and representation in comics on the page and behind the scenes, DC had a trans superhero written by a trans woman. You would think that’d be a bigger deal, wouldn’t you? It would seem to fit right into what people have been clamoring for, doesn’t it?

That’s not to say that DC hasn’t created trans characters before; they just haven’t been superheroes. Wanda from Neil Gaiman’s Sandman run was trans, and has been both embraced by fans keeping it in the context of the time it came out and criticized in hindsight. Shvaughn Erin, the Legion of Super-Heroes Science Police Liaison, was trans but that has since been retconned and she’s back to being cisgender. Gail Simone put in the effort and created Alysia Yeoh, Batgirl’s transgender roommate for her New 52 run on the book, and often incorrectly sited by blogs and news sites as the first true transgender character at Marvel or DC. Unfortunately, after Gail Simone left the book, Alysia Yeoh has mostly faded into obscurity and the team that took over Batgirl afterward was quick to fumble on trans issues. They have since apologized and the issue in question has been modified to remove the transphobic dialogue in subsequent reprints.

I am not counting any characters that are magically trans, or have powers that allow them to change their genders, because that’s not a trans character and you shouldn’t count those either. Marvel has even less trans representation.

If you haven’t heard of Rachel Pollack’s run on Doom Patrol, it’s probably because it’s never been reprinted. And if you haven’t heard of Coagula, it’s for the same reason. Her stories have never been reprinted. After Rachel Pollack’s run on Doom Patrol ended, no one seemed to know what to do with the character, and she would appear just a little more before being unceremoniously killed off.

I’ve been seeing a lot of articles written lately about the efforts DC has been putting in to making more diverse comics. If they’re really invested in that, why not bring back their only trans superhero and reintroduce Coagula to a new generation of readers? Or at very least just reprint Rachel Pollack’s Doom Patrol run? Reprinting those issues in a couple of trades or so would be a great start for DC to show that they have an interest in trans representation.