Jen Krueger: Down Another Rabbit Hole 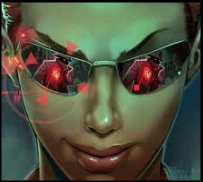 A few days ago I decided enough was enough. My rig was light on hardware, but I had a few good programs and some decent resources at my disposal, so it seemed time to take on Jinteki Corporation, whose work in the biotech sector I can only assume is more sinister than the public realizes. I made a run at a few of their servers in the hopes of scoring some of their secret agendas, but it wasn’t long before they’d lured me into a trap that put an end to my attempt at hacking them. Then again, I’m sure I’ll make another run at them in the near future since all of this happened in Android: Netrunner, a card game I’ve recently become enamored with.

Prior to six months ago, I hadn’t played a tabletop game in years. This is probably not very unusual for an adult; but even as a kid, I didn’t play them often. My infrequent interaction with board and card games probably had something to do with the fact that I’m an only child who wasn’t particularly socially skilled, meaning a group of playmates with which to play games wasn’t a given for me. But it was probably also partially due to the fact that most of the board and card games I was exposed to never struck me as particularly unique or engaging. Sure, a game of Scrabble here or a hand of Uno there could be fun, but I never found myself jonsing for another round of either, or any of their ilk.

Then what happened six months ago, you may ask? A friend of mine introduced me to a slew of new titles over the course of a two-day gaming marathon. They ranged from card game Dominion, to storytelling game Fiasco, to the Game of Thrones board game, to name a few. Over more than 15 hours of gaming, I found that I liked almost every game we played. A couple more get-togethers after that turned into me introducing other people to some of the titles I’d enjoyed most, and I realized that as quickly as I’d started wanting to play a board or card game once a month, I’d moved on to wanting to play one once a week. When my gaming Sherpa introduced me to Android: Netrunner a few days ago, it only took a single playthrough for me to immediately want my own set of the game.

But how was tabletop gaming able to suck me in so fast? The larger selection, greater uniqueness, and higher quality of titles today are certainly big factors. And I’m sure it doesn’t hurt that a lot of my friends are into tabletop gaming now too. Of course the combination of more engaging games and a circle of friends to play them with will make the experience of gaming now much better than my childhood experiences. Ultimately, I don’t think my status as a tabletop game convert can be entirely credited to the games themselves, or the people I play them with (fun and lovely as both are). Like many other things in my life, my gaming geek outs can be traced back to a pretty simple fact about me as a person:

I am a fangirl.

When I get into a new TV show, I move incredibly quickly from pilot viewing to binge watching. When I like a book that kicks off a series, I don’t wait to finish the first installment before buying the rest of them. And when I started doing improv, I was going to at least three shows a week before I’d finished my level one class. But this behavior doesn’t come from a conscious decision on my part to get more into the things I like. And I’m also not a fangirl of things like Doctor Who and the Mountain Goats because something about them made me love them exponentially more than other shows and bands, respectively. I’m a fangirl because (for better or for worse) anything I love, I love intensely. My favorite movies and comics may bring out signs of this propensity, but the trait itself is ingrained in me independent of any specific work. Trekkie or Browncoat, Gaimanite or Potterhead, I think all fanboys and fangirls have this in common. We couldn’t keep ourselves from nerding out about the things we like if we tried. Then again, who would bother trying? Embracing my status as a fangirl makes it easy to unabashedly delve headlong into anything I think is cool and have a great time doing it.

Speaking of which, I’ve got some reading up to do on Android: Netrunner expansions, because new packs of cards are released monthly so you can keep customizing and honing your personal deck. How cool is that?!