REVIEW: The Dumbest Idea Ever! 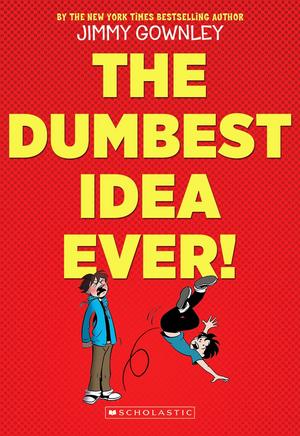 “Where do you get your ideas?”

“Write what you know.”

One stereotypical question often leads to one stereotypical answer and in this case, the results have been magical. Jimmy Gownley is best known as the creator of Amanda Rules!, an utterly charming series of stories that are well worth your attention. Here, he reveals the secret origin of the comic in a delightful coming of age story that is highly recommended.

Gownley recounts how as a teen he was fascinated by comics when he wasn’t hanging with his friends and playing basketball for his private school in Girardville, PA. The nuns at the school found his interest in reading comics unacceptable so he prepared a compelling report on the value of graphic novels which earned him an A but failed to change his teacher’s mind. And it was only after then that he discovered comic book shops, opening his mind to material beyond super-heroes.

As he entered high school, he became obsessed with comics and art, which adversely affected his grades, but did lead to his meeting Ellen Toole, who was first a friend then a first girlfriend, a woman who never doubted his potential. Finally, he decided to try his hand at his own comic, inspired by Cerebus the Aardvark. He labored over the beginning of a space fantasy and turned the pages over to his best friend, who took three weeks to read it before delivering the verdict of “meh”. When his pal suggests Jimmy create a comic about “us”, he replies with “That’s the dumbest idea ever!”

But it’s also the beginning of Amelia and a career that has brightened countless readers’ lives and made Gownley a bonifide star creator. When the first issue is completed, his parents agreed to finance it being printed and so began an odyssey that brought fame, a swelled ego, and a lot of attention from teachers, friends, and the local media. His relationship with Ellen evolves and deepens along the way and he continues to play basketball, but in the end, it’s a rough road to fame and fortune. There’s a nice Author’s Note at the end which helps clear up some of the reality behind the graphic retelling of his early years.

Gownley’s eye-pleasing art and storytelling makes this a compelling read, one that should prove inspirational to budding creators across the land. While aimed at grades 4-7, it’s a universal enough story for all ages.