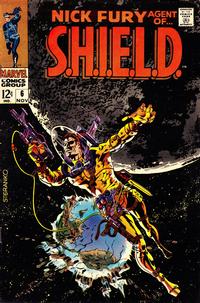 My last ComicMix article ran Tuesday past, January 29, 2014. When first posted the image used was so small it almost unreadable. Mike Weber posted the following in the comment section

Heh. That S.H.I.E.L.D. cover you reproduce so illegibly small at the column head was knocked off in the ‘80s for the back glass on a pinball machine named “Blackout”.

I had nothing to do with the art, Mike.

I think since no other art on the site is in such a state, perhaps Mr. Gold did so purposely. He’s fed up with my stuff arriving with but a few minutes to spare and what better way to show me he’s not standing for my shit than sending me a “I’m not standing for your shit’”email this?

There are many reasons why the art is reproduced in such a manner. The top four are listed below:

a) He’s not standing for my shit.

b) Because I’m black.

c) He’s not standing for my shit and I’m black.

d) Or, maybe (and let this be real the actual reason), there’s an issue with the site.

Guess which reason won’t be mentioned during the annual Black Panel at the San Diego Comic Con?

Someone is bound (A Plant? No!) too ask the question, “why is ComicMix disrespecting the most influential and sexist black man who has ever worked in comics?” That person I have never met will certainly follow up with “how can ComicMix hate when he’s committed to finding a cure for sex addiction in pretty women between the ages of 18-21, feeding the hungry and preaching the gospel?”

Then the completely unknown to me person will undoubtedly bring up how each of those noble undertaking are more time consuming than the other (from last to first…give that a sec) and ComicMix should be boycotted.

The following was posted by Doctor R-Man

A bit OT, but I have a question.

Exactly what licensing issues are preventing Milestone characters from seeing use in DC stories?

Could you guys please allow DC to continue to use the characters? I’m hoping you could give DC a chance and sort this out.

It really doesn’t help for a character like Static to be stuck in limbo.

Milestone has decided if DC wants to use our characters they are forbidden to use any person of color in any of their books. They must also stop using the word and the color black. Frankly, we don’t see what the big deal is. We see this as neither unreasonable nor racial.

What do I consider an unreasonable demand?

Let’s see…a letter from a lawyer telling me to stop doing something a million other people are doing. Well, I can’t stop doing it because I have no control over where it’s being done.

But! If I could stop it I would.

Not because I give a flying fuck about some lawyer that my lawyers would destroy like the Seahawks destroyed the Broncos, no, I’d do it just to see the realization of just how dumb a move this was dawn on those who had the letter sent.

That realization would come fast, hard and often when they have to answer the question of why send a cease and desist letter on the eve of Black History Month that demands the removal of a black iconic character from a place where that character is being recognized as a part of black history?

That’s what I would consider unreasonable and what the black press and public would consider racial. I don’t see it as racial but what I see can’t stop what people think.

But Doctor, I (sorry Peter) I digress.

The above two examples are just plain stupid and I’m sure you get the joke that they are two fictional (as of now) instances that illustrate just how wrong a wrong move could be.

To your question about Milestone and DC: other than non-compete clauses and then only when necessary, I don’t comment on contractual agreements when those agreements are still valid that has all the making of a wrong move.

I have no idea where you heard this from, but I’ve got a pretty good idea – if I’m right I feel it’s a bit of a bitch move to say a contract is preventing you from doing something as it always cast the other party as the bad guy. It’s like the police saying someone is a person of interest. Everyone thinks that person is guilty.

Consider the source, when one party feels it needs to speak on what they cannot do because of an agreement there is always a self-serving agenda.

I’ve heard everything from Milestone is preventing DC from using the characters, Milestone is going to Marvel, Milestone runs the east coast drug trade and DC owed us money so Doomsday was sent to kill Superman because of that debt.

My dear Doctor, even if something is true, until it’s confirmed it’s hearsay. On that note, I’d like to take this time and confirm rather or not it’s true or not. The hell with not commenting.

It’s all true. Doomsday worked for us.