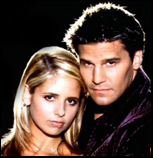 Plenty of individual panels have been freeze-framed in my head all afternoon, but none of them have led to any kind of sequential storytelling. This is the worst part of being a writer with a weekly column – watching the hands on the clock inexorably winding down to zero hour, the time by which I need to get the thing e-mailed to Mike and Glenn.

You never know where ideas come from. My column Baby’s First Fooprints came about from a little joke I made at Alix’s sonogram; today I was listening to the soundtrack of Angel and I realized that, while I’ve talked a lot about the intrepid Slayer, I’ve hardly ever mentioned it’s a spin-off; in fact, few people ever talk about it, which in its own way was just as riveting as its parent show. Angel continued the story of Buffy Summer’s vampire lover, played by David Boreanaze, who left Sunnydale at the end of season 3 of Buffy because he realized that he and the Slayer had no future. Her path was one of growth and exploration, and his was of acknowledging the past and seeking redemption for its sins.

It was a dark, gritty, film-noir type of show, with its main character struggling for atonement from his evil past. The first episode opened in a bar, and the first time we see Angel he is apparently drunk, which, not too subtly, set the tone of the series – just as the recovering alcoholic is always just one drink away from losing his or her life to the bottle, Angel will forever be just “one drink away” from losing his soul and become Angelus again. Even the supporting characters are struggling for atonement from their past sins – Doyle is a half-demon carrying a secret burden; Wesley is the failed Watcher (and, we learn later, the son of an emotionally abusing father) who must prove to himself that he has something to offer to the world; and Cordelia must expiate the sins of her selfish and cruel high school persona and become a mature and caring woman.

With the introduction of the law firm Wolfram & Hart and the attorneys Lindsey McDonald and Lilah Morgan, the induction of the innocent Winifred “Fred” Burkel and the street-smart Charles Gunn as part of the “We Help The Helpless” team, Angel’s themes became more and more about trust and deceit, hate and love, innocence and guilt, and the duplicity of good and evil. Finally, the show, I think, became the story of the necessity of sacrifice for the greater good, with the ultimate sacrifice being Angel’s renunciation of his promised return to humanity (the Shanshu Prophecy) in the penultimate episode.

A lot of people I know who were major fans of Buffy didn’t like Angel, and rarely watched it, if ever. They said it was too dark for them, too morbid. But I think the shows were bookends – if Buffy was about the empowerment of the dumb blonde in the dark alley attacked by a monster, then Angel was about the monster who wanted to stop living in that dark alley and let the girl escape. If Buffy was about telling women to step out of the shadows and embrace themselves, then Angel was about telling us, all of us, men and women, to use the shadows in our lives to makes us stronger.