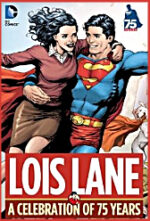 Though she did nothing wrong, and she’s totally innocent in this.

I was sitting here tonight wracking my brain while absentmindedly watching The Devil Wears Prada for the zillionth time (Meryl Streep just completely rocks as Miranda Priestley, a thinly veiled “version” of Anna Wintour of Vogue magazine) and surfing the web for ideas when I decided to check out Corinna’s column, Cliffs of Insanity, over at GeekMom.com. (Yes, I can multi-task.) Her November 15th column caught my eye, dealing as it does with a woman also close to my heart, though this woman only exists as a trademark of DC Entertainment, nee Comics.

Corinna’s column, Lois Lane and Comic Culture, is ostensibly a review of the recently released Lois Lane: A Celebration of 75 Years, and, although I haven’t read it (more on that in a bit), Corinna doesn’t hesitate to point out that Lois has and is a bellwether of the status of women in comics. Quoting Corinna:

“When there was a great movement to more independent women, Lois was smart, strong, funny, tough, and worthy of admiration. When there was a backlash after World War II, she morphed into something less admirable. Later, she regained some of her original intelligence and focus on journalism. But recently, not so much.

“As society moves forward, the comic industry seems to be going backward.

“I cannot help thinking the stories I hear constantly about numerous, well-known comic pros basically running their own version of “casting couches” at conventions, about those employed by the big two companies who create a hostile environment for female characters and creators, and about the ever-present dismissive attitude by a very vocal group of male comic fans who are hostile to women even reading superhero comics, has something to do with Lois Lane’s devaluation of the last few years.

“Lois was created at a time when women were starting to have careers. In every telling of Superman’s origin, Lois is there, not necessarily as a love interest, but always as a tough, professional woman…”

Especially in the Fleisher Studio theatrical Superman animated shorts of the mid-1940s, in which Lois was snarky, resourceful, sarcastic, brave, contemptuous of Clark Kent, and didn’t moon over Superman.”

“Yet Lois’s history is loaded with stories that are somewhat cringe-worthy.”

Yeah, they were. Especially in the Silver Age: Lois Lane: Bearded Woman; Lois Lane: Conehead; Lois Lane: I Married A Monster From Mars And Superman Was The Best Man!! (*choke*sob*) But those stories, silly as they were, are understandable as part of an era (which Corinna points out in her column) in which it behooved the U. S. government to get Madison Avenue and American industries, including the publishing industry, to make a concerted effort to get Rosie the Riveter out of the factory and back to kinder and kuche.

But Corinna also makes mention of some good stories about Lois, which I remember reading and also enjoyed: Wonder Woman #170, written by Phil Jimenez, in which Lois spends a day with Diana, and they get to talking woman-to-woman; and Adventures of Superman #631, by Greg Rucka, which is “Lois Lane: War Correspondent.”

But here’s where I started seeing red and getting really pissed off.

And I asked myself…

Should I write a column about how pissed off I am that (a) I didn’t even know about this book because no one from DC approached me about it; and (b) apparently, from Corinna’s review and from the book’s Amazon page, there is no mention of my Lois Lane 1986 mini-series, When It Rains, God Is Crying.

I mean, it’s one thing to understand why the press didn’t want to hear that I “beat” Gail – from Gail herself, I must add – at being the first WW writer in the history of the character, because if she isn’t, there’s no story and the DC PR department would have egg on their faces…

But to ignore a “seminal” Lois Lane story, seminal in that it was her book, the first in many, many years, and that it didn’t feature her running googly-eyed after Superman to prove he was Clark Kent, but dealt with an important issue which hasn’t gone away, and if anything, has gotten worse – there’s a reason Law & Order: Special Victims Unit is on television 24 hours a day…

…To ignore a story with absolutely magnificent artwork by the late, great Gray Morrow, who told me he was honored to be part of it…

…To ignore a story that Robert Greenberger, as editor, sweated over as he encouraged and guided me and Gray to do our best work…

…To ignore a story into which I poured my heart.

And I wasn’t going to write about this, because it certainly wouldn’t be a smart thing to do, burning bridges and not “politically” advantageous and all that, but then, well, I figured, hey, I like to think of myself as an honest writer, I’ve written about my struggles with depression, I’ve written about my dad and my mom, I’ve shared a lot of things here, so fuck it, I decided, I’m going to share this too.

Yeah, it really pisses me off, people. And it hurts.

As Miranda Priestly would say: