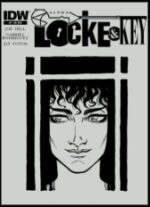 With the bustle of the holiday season and the craziness that inevitably accompanies the end of the year, it wasn’t until this week that I was able to get to the final installment of Locke & Key. Joe Hill has been penning this amazing comic since 2008, but I didn’t start reading until 2012, so by the time I came to it there were only seven issues left to be published. For a lot of people, this would be disheartening. For me, it was thrilling.

Comics can be daunting. Spider-Man has been around since 1962, Batman made his debut in 1939, and Superman had them both beat by first hitting the scene in 1933. For a completionist like me, picking up one of these comic book staples would mean starting at the very beginning, and that seems downright impossible. Superman had 716 issues before a relaunch in 2011 brought another #1 around, and this doesn’t even take into account other titles in which Superman appears. Assure me all you want that there are acceptable jumping in points for long-running comics that don’t require me starting from day one, but I’ll never be able to shake the sneaking suspicion I’d understand them better, and therefore like them more, if I did indeed start at issue #1 and work my way forward.

Superman: Red Son, on the other hand? Love it. Mark Millar’s three-issue mini-series exploring what Superman’s life would have been like if he’d landed in the Soviet Union is well written, unique, and managed to get me to crack its cover despite the fact that its titular hero has decades of history behind him because in this particular volume, he actually doesn’t. By standing completely on its own, Superman: Red Son was accessible to me in a way no other Superman comic ever has been. And yes, I realize there are other stand-alone volumes out there, but even with something self-contained like Grant Morrison’s All-Star Superman, I find myself held at arm’s length because there’s still an assumption that I know more about Superman when I start than I actually do.

Yet the years of backstory aren’t the only reason long-running comics feel impenetrable to me. The fact that they’re continuing their adventures into the future with no end in sight is equally discouraging, if not more so. How formidable can a villain be when I know there’s always another waiting in the wings? How high can tension run toward a climax when it’s understood there’s always another around the bend? And most importantly, how can a hero truly best his inner demons when his story is expected to carry on indefinitely?

Locke & Key is the best comic I have ever read. A large part of what makes it so amazing is not the fact that there’s a whole world in its pages, but that its pages contain its whole world. Whether or not Hill had the entire saga in mind when he wrote the first series, Welcome to Lovecraft, by the last frame of Alpha there is no stone left unturned. I came in knowing nothing of the story or characters, and that was perfect because I didn’t need to know anything of them.

The sole thing I knew from the outset was that I’d only have 39 issues to spend with the Locke family, and because of this, I appreciated each moment with them more than I could have without their end in sight. The characters travel an arc that is more moving in its fixed breadth than it could ever be were that arc just part of a larger ebb and flow. Their story is exactly complete, and so too is my enjoyment of it.