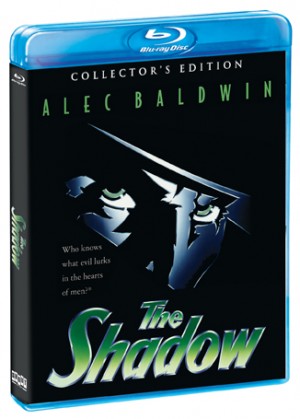 The Shadow, the template for most of comic books’ mystery men, captured America’s imagination in radio and pulp magazines for decades. His paperback revival in the 1960s and 1970s (the latter with spectacular covers from Steranko) led to his brilliant portrayal by Denny O’Neil and Michael William Kaluta in the short-lived DC Comics adaptation. Currently, he’s cutting down the weed of crime for Dynamite Entertainment but this overlooked gem of a film is worth a look. Here are the official details:

Alec Baldwin stars with Penelope Ann Miller as the legendary crime-fighting superhero in “The wittiest action-adventure since Indiana Jones!” (NBC News). Donning his sweeping black cape and disguise, The Shadow takes on his most dangerous nemesis yet: the last descendant of the great Genghis Khan whose weapon of choice is an atomic bomb. With the fate of humanity hanging in the balance, they square off for a spectacular battle in a dazzling mixture of mind-blowing special effects, humor and a dose of the macabre that will hold you spellbound!