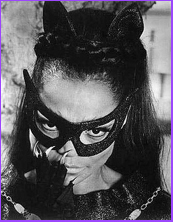 I think Catwoman is the most fascinating woman in the DC universe.

I can never have a conversation about the character with men and women of a certain age about her without their mentioning Julie Newmar, who played the lithe kittenish female fatale on the Batman television series of the ‘60s as a woman whom we knew had a thing for her “arch-enemy” but loved her diamonds more. With men a certain look comes into their eyes; I wouldn’t exactly call it “leering,” but it sure comes close. With women, I think they remember Newmar’s Catwoman as an independent woman going after what she wanted – be it the Caped Avenger or the ancient Egyptian cat-stature worth millions. (And what little girl didn’t want to look like Julie Newmar when she grew up?)

Then there is Eartha Kitt, who took over the role from Ms. Newmar. She had no desire to rub her fur on the Caped Avenger – her signature purrrrrr-fectly contralto, raspy voice let us know that the only catnip she was interested in was money, and lots of it. Her Catwoman was a bit more, well, sophisticated, than Newmar’s, and I think a little off-putting to the adolescent boys – and girls – of the era; a little scarier because she was more adult.

Michelle Pfieffer, although blonde, totally understood Selina, who, in my opinion, is always straddling a psychic crevice. To paraphrase Mae West, “When I’m good, I’m very, very good. And mousy. And let people walk all over me. And dress like a frump. Barely brush my hair and rarely brush my teeth. But when I’m bad, I’m better. And proud. And strong. And smart. And sexy – my lips taste like vanilla cherry!” All those in favor of Ms. Pfieffer, raise your hands.

Halle Berry? Oi!!!! Though I’m sure there are those out there who would love to finish shredding her costume until she’s perfectly naked.

Anne Hathaway, whose breakout role as Andy Sachs (“Ahn-dreya,” as Meryl Streep – as Miranda Priestly – called her when not calling her “Emily”) in The Devil Wears Prada was absolutely luminous, is playing Selina in the next – and final – installment of Christopher Nolan’s brilliant Batman trilogy, due to hit theatres this summer.

Don’t know about you, but I can’t wait. I have a feeling that, like Vivien Leigh as Scarlett O’Hara, this is going to be perfect and dream casting. Okay, the jury is still out, but I believe that not only is Hathaway an actress who is capable of delving into her emotional and psychological shadows – see Rachel Getting Married – but she is also a sexy, talented, and intelligent player whom, I am sure, will bring all those factors into the role.

And she sings, too!

I could easily see Selina Kyle as a nightclub chanteuse. Singing “God Bless the Child.” And “Strange Fruit.” And “Lover Man.”

What do you think? What songs would be on Selina’s repertoire?