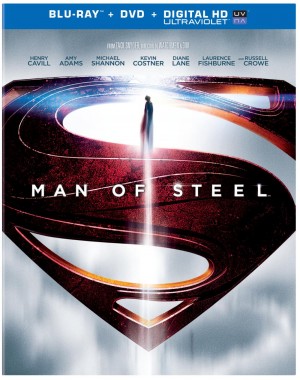 At 75, Superman remains the archetypal superhero and still relevant to comic books and the American people. When created by Jerry Siegel and Joe Shuster, he was an amalgam of the myths and pulps both boys devoured, a bit of wish fulfillment given how crappy their lives in Cleveland were. Little did they suspect their hero would become an icon for generations and become one of the most recognized figures around the world.

Zack Snyder attempted to bring that sense of gravitas to the is interpretation of Superman in this summer’s Man of Steel. The problem is, he made such a somber film that he totally drained it of the gosh wow feeling he was always intended to convey. He and screenwriter David Goyer made an interesting decision to make this a first contact story but both men should have remembered the sense of exhalation we got from the four-color comics, the George Reeves television series and seeing Christopher Reeve first appear in the red and blue.

The movie divided critics, fans, and casual viewers most faulting it for its lack of humor and overdone fight sequences. Still, at $662 million worldwide, one can’t ignore its commercial fortunes. We have a chance to revisit the production with the release this week of the film on Blu-ray, courtesy of Warner Home Video.

Superman has always been reflective of the times we live in. These days, we’re more fearful and suspicious of strangers thanks to 9/11 and a constant global threat to our way of life. This film somewhat addresses those fears with a galactic component but then doesn’t really explore it in depth. In fact, the film is entertaining but avoids delving deep when it would be a better film. Instead, things get to blow up with excessiveness bordering on pornographic which someone decided audiences crave. Really, we don’t. We have Michael Bay films and Pacific Rim for that. 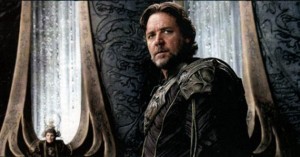 The origin story, to me thoroughly unnecessary this time around but no one asked, has been endlessly told and retold, modified through the interests of the creators at work. This time around, we have a fresh looking Krypton and Science Council, dealing with the death throes of the planet and a coup from General Zod. I can buy that. I can even appreciate the efforts to link Zod and Jor-El more closely because modern drama seems to demand that. On the other hand, this is the first of two occasions where the man bred for war gets his ass kicked by a member of the House of El and that makes no sense.

I disliked Jor-El dying before Krypton because the notion of father and mother holding one another as their son rockets to freedom is indelible.

When Jerry Siegel and Joe Shuster created the character and began telling stories, they were bringing over a decade’s worth of pulp reading experience with them and wrote from the perspective of poor Jews living in Cleveland. As a result, some of the characterizations and dynamics from the 1930s no longer work in 2013 so I am largely fine with the major alterations. 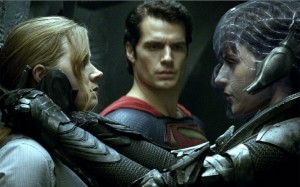 Kent’s fears for his growing son work because in today’s world, someone with those powers would be whisked away in a heartbeat. The trailer makes him out to be a bastard when it seems he is willing to let others die to protect his son’s secret but the full scene plays far better than I feared. He’s thoroughly devoted to the boy and his sacrifice is an act of love (from a writing standpoint, it’s silly since Clark could have gotten the dog and been back before anyone noticed, but it sure beats poor Glenn Ford’s one and done scene).

When the film lets the characters talk to one another, there is a heart and warmth that I wish was allowed to infuse the remainder of the film. The Clark and Martha scenes are the film’s best and credit to Henry Cavil and Diane Lane for making those work so well.

Similarly, critics have taken the filmmakers to task for letting Lois learn Clark’s secret at the outset of their relationship. Frankly, I think this worked just fine. She is the only one to connect the dots, to find the mystery hero and establishes a bedrock of trust between them before the romance kicks in. I miss the steel Phyllis Coates and Margot Kidder brought to the character and at 38, Amy Adams is a little old for the role, but I bought it.

On the other hand, Clark wandering until he is 33 seems farfetched. Let’s say he began wandering after high school, that’s at 18. It takes him 15 years to get his shit together and do something with his powers? This sequence, lifted from Waid’s wonderful Birthright graphic novel is nicely handled but this symbol of hope is saddled with too much Christian symbolism for my taste. (speaking of Waid, I totally agree with much of his assessment over at Thrillbent.) 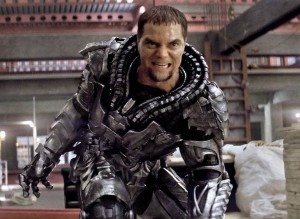 Similarly, when he finally inserts the key into the ancient spacecraft, Jor-El arrives to tutor him. For a film trying to distance itself from Richard Donner’s faithful adaptation of the source material, lifting this bit doesn’t work. We get way too much Russell Crowe from here on out, making him the literal deus ex machina.

The filmmakers talk about this being handled as a first contact story which is a fresh angle and I wish they did more with it. Instead, they give us a few lines here and there and little else when this could have been a far richer segment of the story. Instead, the army and Emil Hamilton are there to serve expository purposes and not dramatic ones.

Zod arrives and informs us that out of thousands of colonizing ships not a single one has endured. That stretches the law of averages and can be easily proven wrong in a sequel, robbing Kal-El of his Last Son of Krypton designation. He then announces that whereas Jor-El saw his son as the bridge between races, Zod would rather be the sole sentient race on Earth. To accomplish that goal, he is ready to annihilate human life. He grows one-dimensional and monomaniacal with each passing scene, reducing him to a standard film villain instead of a complex man.

Which leads me to the action sequences which are really too overly long scenes designed to trash everything Superman holds dear, starting with Smallville Why Metropolis is targeted since he’s not yet connected with the city is a mystery, except it gives us a chance to see Perry White, given little to do other than doubt Lois. Steve Trevor is named way too late and Jenny is never properly introduced for us to care about her predicament during the overblown and thoroughly unneeded trashing of the city.

Before I get to the climax, I do want to note that for two devices battering the planet with some gravimetric hoohah, there is remarkably little mentioned about how this was affecting the rest of the world. I would imagine the tsunamis in the Indian Ocean would be devastating while the seismic waves radiating throughout North America would cripple the power gird among other issues. These are more interesting dilemmas than watching two Kryptonians batter one another with rebar. 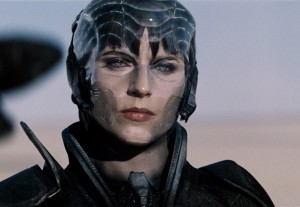 Superman is a symbol of hope. We were all raised to believe that and the film mentions it repeatedly. And yet, when he has Zod in a chokehold and hears the general’s threats that he will never stop, Superman feels he has one choice. Actually, as staged, I sat there considering several other options. If I could do it, so could the Man of Steel. He did not need to kill. But he did and then got over it way too fast, way too easily. We were cheated of a big emotional payoff.

This is a world that now knows there is life beyond the stars and how that colors their perception of these forthcoming heroes will be fascinating, if done right. But first, we need Superman to be what has always been, a symbol of truth and justice, a righter of wrongs and a beacon we want to aspire to be. Henry Cavil makes me want to believe in him and I hope he gets a chance to really shine in what is beginning to look like an overstuffed sequel.

The movie looks and sounds as spectacular as one would expect from the mammoth production. To celebrate its importance, the package comes with two Blu-ray discs, a DVD, and Ultraviolet digital copy. On the first disc comes the film plus several features: Strong Characters, Legendary Roles (25:59) which has the cast eloquently discuss the mythic proportions of Superman but really needed more historic context, tracing his development through the years; All Out Action (26:02), which showcases how hard the performers had to train; Krypton Decoded (6:42), hosted by Dylan Sprayberry (teen Clark) and looks at how they blew Krypton up; Superman 75th Anniversary Animated Short (2:03), brilliantly executed by Bruce Timm and making me longer for that sense of wonder to be in the film itself; New Zealand: Home to Middle Earth (6:35), which seems arbitrarily included to promote The Hobbit series.

Disc Two includes the lengthy Journey of Discovery: Creating Man of Steel (2:54:05), essentially replaying the entire film but with actors, producers, and others popping up on screen to discuss elements of the production. At times you get four screens – the film, the speaker, the effects or design, and something else. Highlights include Snyder talking about the importance of Hans Zimmer’s score, and lets a climactic scene play with just the music to demonstrate his point; Antje Traue (Faora) talking about how challenging it was to act in her heavy costume, while Michael Shannon noted his motion capture suit posed entirely different challenges. Richard Schiff’s commentary was lighthearted but mostly superfluous but Russell Crowe’s stories are far more interesting including recounting his first meeting with Cavill. The disc also includes a mocukmentary, Planet Krypton (17:18), which seems to be someone’s vanity project and is easily skipped.