Scarface Comes to Blu-ray in Style 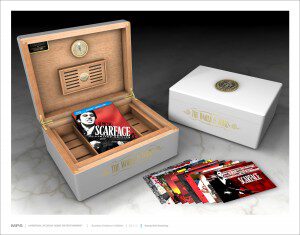 Coming in September is the Blu-ray debut of the classic Al Pacino film Scarface on September 6. Universal Home Entertainment is sparing nothing to make certain this becomes quite the event. There have been art contests and now there’s the imminent arrival of the Scarface-themed humidor.

For the ultimate collector and cigar enthusiast, an elegantly hand-crafted Scarface-themed humidor will be made available in an exclusive, never-before-available, limited edition, along with the new Scarface Special Limited Edition Blu-ray.

Created by the renowned Daniel Marshall, the humidor’s exterior is hand painted and polished with the Marshall’s trademark “1000 coat brilliant finish.”  The interior – made with untreated Spanish cedar – will properly condition and age approximately 100 cigars at optimal humidity levels. Limited to 1,000 worldwide, each individually numbered humidor comes embellished with custom medallions inspired by the iconic film and includes a certificate of authenticity.

As seen in the photo above, The Scarface Special Limited Edition Blu-ray also includes art cards from the “Scarface Kingpins of Design” fan art contest where fans had a once-in-a-lifetime opportunity to design Scarface-inspired artwork using classic Tony Montana images from the film.

Fans voted on their favorite ten submissions which will be featured as exclusive art cards in this upcoming edition and the winners are:

With the highest number of fan votes, Grand Prize winner Adolfo Maalindog’s winning design will not only be included as an art card in the upcoming Scarface Limited Edition Blu-ray, but he has also won a trip for two to Las Vegas where his Scarface-inspired art will appear on a billboard to promote the release.

Here’s the formal release with the details:

Considered one of the most influential gangster films ever made, Scarface’s gritty depiction of Tony Montana’s lethal ambition has made it a cultural touchstone that spans generations. Now, fans can experience the film’s raw power in the newly restored, high-resolution, high-definition picture and explosive 7.1 audio for the first time ever. Exclusive new bonus content created especially for this release reveals the film’s iconic legacy as one of the greatest crime sagas of all time. For a limited time only, Scarface Special Limited Edition Blu-ray comes with collectible SteelBook packaging, ten exclusive art cards, a digital copy of the film and a DVD of the original 1932 Scarface, making it a must-own addition to every film fan’s library. And, for the ultimate collector and cigar enthusiast, an elegantly hand-crafted Scarface-themed humidor will be made available in an exclusive, never-before-available, limited edition. Created by the renowned Daniel Marshall, the humidor’s exterior is hand painted and polished with the Marshall’s trademark “1000 coat brilliant finish.”  The interior – made with untreated Spanish cedar – will properly condition and age approximately 100 cigars at optimal humidity levels. Limited to 1,000 worldwide, each individually numbered humidor comes embellished with custom medallions inspired by the iconic film and includes a certificate of authenticity.

“Nearly 30 years after it first exploded onto the screen, Scarface stands as a cultural icon with a passionate and growing fan base that continues to exert an enduring influence on not just moviemakers but artists across the entire pop-culture landscape,” said Craig Kornblau, President of Universal Studios Home Entertainment.  “Now, for the first time ever, fans of this jewel in the Universal crown can enjoy Scarface with the spectacular picture and sound quality that only Blu-ray provides.”

•       The Scarface Phenomenon— This all-new documentary presents Scarface as a unique phenomenon in cinema history.  It explores how a film plagued by controversy leading up to its release has become a Hollywood classic, influencing a whole new generation of filmmakers and leaving a lasting imprint on popular culture.

•      The World of Tony Montana —Experience the world of the ultimate gangster and hear from experts on the real world violence, fear and paranoia that surrounds a drug lord.

•       The Rebirth —Director Brian De Palma, producer Martin Bregman, actor Al Pacino, and screenwriter Oliver Stone revisit the history of Scarface, from the inspiration of the original Howard Hawks classic to the evolution of the script.

•       The Acting — Join the filmmakers, Al Pacino and Steven Bauer to discover how each of the roles was cast and how Brian De Palma worked with his actors to get unforgettable performances.

•       The Creating — A fascinating, controversial and definitive journey through the making of the film, which began with the production being forced to leave its initial location in Florida. Discover how the chainsaw scene was filmed, learn about the production design, the photography, and the struggle to get the film an “R” rating.

•      Scarface: The TV Version—A revealing and hilarious montage of film clips comparing the theatrical version to the network television version of Scarface.

•      The Making of Scarface: The Video Game: Immerse yourself in the world of Scarface in this behind-the-scenes look at the creation of the video game.

•      Scarface Scoreboard—Watch Scarface like never before.  Keep track of the number of times the “F” word is used and monitor the bullets fired!

•       Picture in Picture—access  interview footage of Brian De Palma, Al Pacino, Screenwriter Oliver Stone, and others without interruption to the movie experience.   Also featured is a scene comparison between the 1983 version of Scarface and Howard Hawks’ original film.

•      BD-LIVE™—Access the BD-Live™ Center through your Internet-connected player to get even more content, watch the latest trailers and more.

o   Video Timeline: Users can easily bring up the video timeline, allowing them to instantly access any point in the movie.

o   Mobile-To-Go: Users can unlock a selection of bonus content with their Blu-ray™ discs to save to mobile devices or to stream from anywhere there’s a Wi-Fi network, enabling them to enjoy exclusive content on the go, anytime, anywhere.

o   Keyboard: Enter data into a Blu-ray™ player with your device’s easy and intuitive keyboard to facilitate such Blu-ray™ features as chatting with friends and sending messages.

In the spring of 1980, the Mariel boatlift brought thousands of Cuban refugees to the sun-washed avenues of Miami in search of the American dream. From acclaimed director Brian DePalma, Scarface is the rags-to-riches story of Tony Montana (Al Pacino), who finds wealth, power and passion beyond his wildest dreams…at a price he never imagined. Tony Montana’s meteoric rise, lavish life and soul-destroying fall anchor an epic film that inspired a worldwide following. Pacino is at his most memorable as Montana, blasting his way to the top of Miami’s drug underworld in a bravura performance.