HANCOCK TIPS HIS HAT TO THE CATER STREET HANGMAN! 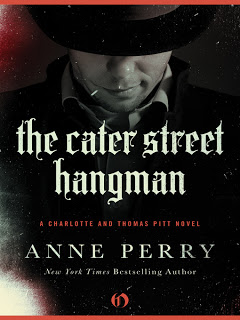 Tales set in the Victorian Era are odd creatures, particularly when one tries to identify whether or not they are Pulp.  Using the thumbnail description for New Pulp that I do, most Victorian mysteries and even adventures do not contain most of what’s needed to be called Pulp.   Even those intentionally venturing into that era of contradictory morals and inhibitions attempting to craft a New Pulp tale from the rich, though nearly strangling history and knowledge of society of that era often struggle with striking a good balance between what Pulp demands and what the Era signified.

Anne Perry did not write THE CATER STREET HANGMAN with any intentions of it being New Pulp. The reason I read it, however, was that many readers of New Pulp, including some of you reading this review this very minute, have been after me for awhile to check out Perry’s Charlotte and Inspector Pitt series of Victorian era mysteries, telling me that this series featuring a young socialite in Victorian society reluctantly encountering and teaming up with a gruff, rather ruffian Police Inspector most definitely qualified as a success in that wild effort to blend Victorian Era and New Pulp sensibilities.

Well, if her first novel in the apparently extremely popular series is any indication, a lot of you were slightly off.

THE CATER STREET HANGMAN is the story of the first meeting of Charlotte Ellison, a daughter of a moderately well to do well placed family in Victorian society and the gruff, rather ruffian Police Inspector Pitt, injecting himself into the lives of the Ellison family due to the murders of several young women in a serial style near the Ellison home.  As the mystery unfolds with the practiced, plodding diligence of a Victorian matriarch relating all her forgotten loves, Perry also gives a fantastic glance into the inner workings of a family and a neighborhood during this era.   She shows the veritable caste system that existed while simultaneously illustrating how people, particularly young adults, bucked and pulled at the system, trying to sow oats while staying between the rigid lines set for them.  She uses the Ellison girls, Charlotte and her two sisters, to do this throughout the book and does it quite well.

Charlotte by far is the most engaging character in HANGMAN.  Clearly born in the wrong time, she is headstrong, plain spoken, and uncomfortable being restrained by frills and lace.  When faced with Inspector Pitt, however, she relies on the trappings of her society to protect her from strange feelings she has for him, revulsion bordering on attraction.    By the time the mystery is resolved, she still resists the urge, the draw to Pitt, but it’s clear that will not last much longer.

Now, having said all that, notice I barely discuss the mystery (it’s paper thin and lost in the societal machinations and moanings and its solution is telegraphed way early) or any action (almost a total lack thereof, honestly) that the book contains.  The plot is solid enough, but moves at a snail’s pace.  As mentioned previously, the truly interesting character of Charlotte stands out from the other Victorian shades around her, so there’s not a lot to draw a New Pulp reader in via the characters.   Pitt’s likable enough, but the tension between he and Charlotte is pedestrian at best.

A decent read if you’re interested in traditionally written Victorian mysteries? Yes.  New Pulp?  Not for this reader.

THREE OUT OF FIVE TIPS OF HANCOCK’S HAT- Perry’s grasp on the Victorian Era earns it at least that much.