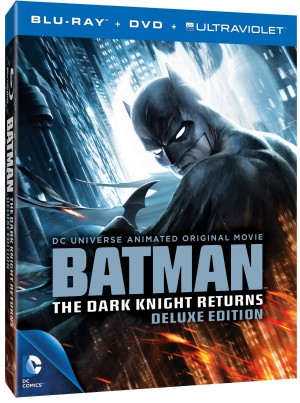 We should have seen this coming. Last fall, Warner Animation unleashed Batman: The Dark Knight Returns, Part 1, adapting the first two issues of Frank Miller’s seminal prestige format miniseries. In January, we finally got Part 2, completing the story of 50 year old Bruce Wayne being forced to don the cape and cowl once more, to bring justice back to a crumbling Gotham City. Out now is Batman: The Dark Knight Returns Deluxe Edition, seamlessly editing the two sections into a 148-minute feature.

As previously reviewed, the adaptation is largely successful, recreating the bleak look and feel of a fascist world, protected by a Man of Steel working for a government Wayne no longer recognizes. The story is clearly Miller’s musing on the role of heroes in the time of Ronald Reagan but it is also a thrilling adventure, looking at a bitter, somewhat broken hero who has turned his back on the people he swore to protect. Events and destiny, though, have something to say about that choice.

So, the question becomes, is it worth buying the combined parts in a single disc? As a film, no, not really. Being a successful adaptation, it lays the ground work in the first half so things explode and rush along in the second., Splicing them together, it plays nicely and ramps things up and without waiting six months, delivers on the promised climax. It’s a satisfying adaptation from writer Bob Goodman and director Jay Oliva.

What you also get that’s new is a fun, interesting Audio Commentary track from Oliva, Goodman and voice director Andrea Romano and a second Blu-ray disc containing all the previous features plus a brand new lengthy documentary on Miller. Masterpiece: Frank Miller’s The Dark Knight Returns (69 minutes), narrated by Malcolm McDowell, not only talks to Miller at length but includes colleagues including Jenette Kahn, Editor Denny O’Neil, collaborator Klaus Janson, admirers Grant Morrison, Michael Uslan, and Mike Carlin. We meet the Virginia fan boy who successfully found work as an artist at Marvel, getting noticed for his work on Daredevil, leading to coming over to DC for Ronin then Dark Knight, helping shape the next generation of storytelling. Unfortunately, we don’t see the remainder of his sporadic career in comics and Hollywood.

The documentary makes this worth owning while the combined feature is a more satisfying viewing experience.