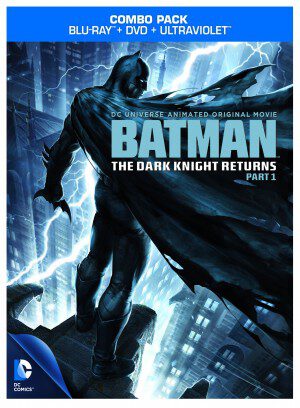 Years in the making, Frank Miller’s The Dark Knight Returns was never intended to rewrite the rules for the Caped Crusader or become the template for a generation of storytelling. It was, though, the culmination of a series of events that occurred at DC Comics and in Miller’s professional development that nicely dovetailed together. The right book, character, and creator all arrived at the right time, when an audience was ready to accept the radical re-imagining.

Ever since the four-part story heralded the arrival of the Prestige Format and was the first entry in the current field of graphic novels, The Dark Knight Returns has been an influential touchstone to storytellers. Its use of character, page construction, color, and theme showed that four-color heroes can be used for darker concepts, exploring new ideas. As a result, people have been clamoring to see it adapted for the screen, any screen, so it could continue to thrill us. We were teased with the folk at Warner Animation paying homage to Miller’s art style and now-iconic imagery in Animaniacs and Batman the Animated Series. 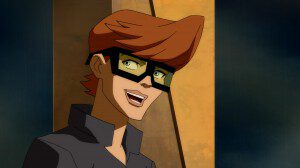 At long last, Warner Premiere has delivered their finest effort, paying tribute to the story written and pencilled by Miller, inked by Klaus Janson, and colored by Lynn Varley. Batman: The Dark Knight Returns Part 1 is out on home video, as a Combo Pack (Blu-ray, DVD, Ultraviolet) and shows the affection from the first frame.

Bob Goodman remained utterly faithful to the story, compressing the first half of the graphic novel into a brisk 76 minutes that still contains the moments you want. Commissioner James Gordon and Bruce Wayne have a nice, warm friendship, Alfred remains his acerbic self, and Carrie Kelly is gung-ho and awkward. The first half of the story deals with several threats to Gotham City, first the gang known as the Mutants and their muscle-bound leader who wants to own the town; and Harvey Dent, seemingly physically cured but proving his mind is as fractured as ever. And watching from confinement is a homicidal maniac long-thought drugged into submission. 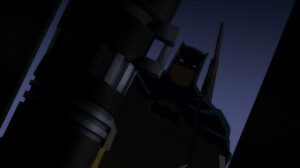 The best thing director Jay Oliva, who cut his teeth on Man of Steel and Green Lantern: Emerald Knights), did was show us what Miller could only hint at: a 50-year old man who really has to struggle to keep up. He strains to climb a rope and isn’t fast enough to take down the mutant leader the first time they brawl (in fact their two fights is almost a template for the Batman-Bane confrontations in The Dark Knight Rises). This is a 50+ hero who hasn’t seen action in a decade, but we know from the opening scene he remains addicted to adrenaline and action. His return evokes the creature of the night that first established his reputation in the city and once more inspires the populace. 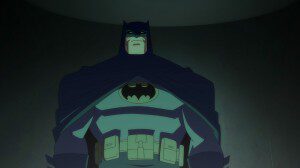 Visually, Miller’s beefed up main characters and gritty style is nicely replicated, complete with making Batman larger-than-life so he dwarfs Carrie and most other mortals. The story remains a future from the fixed point of the 1980s since the story is dependent on that particular view of America, which means so much of the technology appears antiquated by today’s standards but works wonderfully. There’s also a nice meta shout-out to other titles from 1985-87 that helped reshape comics: Crisis on Infinite Earths, Watchmen, and V for Vendetta. 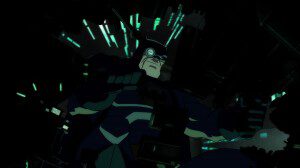 As usual Andrea Romano has assembled a stellar cast for the voices and while most will lament the absence of Kevin Conroy as Batman, Peter Weller more than ably fills the cape and cowl with gravitas. He’s older, wearier. David Selby’s Gordon has much of the same feeling which is nicely contrasted by Ariel Winter’s Carrie. Wade Williams as Dent and Michael McKean as a blowhard psychiatrist nicely round out the cast.

Interestingly, the packaging avoids imitating Miller’s style, a curious choice. Similarly, Miller, Janson and Varley’s lack of participation in the extras is glaring. They are merely represented with a digital comic excerpt from issue one of The Dark Knight. Instead, we get “Her Name if Carrie…Her Role is Robin” (12:00) with Grant Morrison, Mike Carlin, Alan Burnett, Bruce Timm, and others discussing the radical use of a girl as the new sidekick. There are some nice bits placing this in an historic context.  The 2008 “Batman and Me: The Bob Kane Story” (38:00) is reused here and we’re reminded of the egotistical Kane avoiding sharing credit with anyone.

On the Blu-ray is a Two-Face two-parter from Batman the Animated Series. There’s also a sneak peek of part two, due out in early 2013.

It’s a shame Miller wouldn’t participate and the film lacks a commentary track since bringing this to life appears to have been a labor of love for all involved.