Win a Copy of Vikings Season 1 on Blu-ray 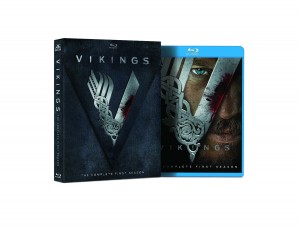 Vikings Season 1 delivers a visceral journey to a thrilling ancient world in this epic new series about history’s bravest and most brutally fearsome warriors.

Vikings follows the adventures of the great hero Ragnar Lothbrok (Travis Fimmel), a Viking chieftain seeking to fulfill his destiny as a conqueror, alongside his ambitious brother Rollo (Clive Standen) and loyal wife Lagertha (Katheryn Winnick).  Throughout his quest, Ragnar faces a path of betrayals and temptations to protect his freedom, family, and life.  When Ragnar teams up with his boat builder friend Floki (Gustaf Skarsgard) to craft a new generation of intrepid ships capable of conquering the rough northern seas, the stage is set for conflict.

For a chance to win your copy of the Blu-ray just answer this  question: Which Viking discovered North America before Columbus?

Have your answer posted by 11:59 p.m.  Saturday, October 19. The decision of the ComicMix judges will be final and this contest is open only to readers in the United States and Canada.