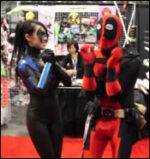 I love visiting New York City, and New York Comic Con is one of my favorite shows. I always have a great time, and this year was no exception. One other thing that remains consistent every year I go is that it all goes by in a total whirlwind blur, and I can barely remember all the things I saw and did, or when they occurred.

But for you, my faithful readers who may not have been able to attend, I’ll try to remember some of the best parts of the weekend, and, as Inigo Montoya would say, “sum up.” So here we go! In no particular order, some of the coolest experiences I had in NYC:

I saw First Date, the Broadway musical starring Zachary Levi, and it was fantastic. I also interviewed Zac at The Nerd Machine booth during the con – so stay tuned for my review of the show and my interview, coming soon! While at the booth, I saw some cool celebrities come by to donate their time for charity pictures with fans, with all money going to benefit the excellent cause of Operation Smile. I think that whole concept is pretty awesome; and it was fun to see Seth Green (who liked my Harley Quinn dress (thanks, Seth!) and showed us his new S.H.I.E.L.D. badge), Greg Grunberg, and David Duchovny all stopping by at various times to donate their time for a good cause.

I went through Artists Alley, which remains one of my favorite parts of NYCC. There I visited with some of the fantastic creators on hand, like Greg Pak, who has a new project called Code Monkey Save World which features characters from Jonathan Coulton songs; Jeremy Dale, whose creator-owned all-ages series Skyward has really hit the stratosphere; and Reilly Brown, who’s working on a new Marvel Infinite (digital only) Deadpool series with series regular writers Gerry Duggan and Brian Posehn, to launch in January 2014. I also chatted with Mark Brooks and learned he’s the new Deadpool cover artist starting this month; and with Georges Jeanty, who will be doing the art for the upcoming Serenity: Leaves on the Wind miniseries that Zack Whedon is writing for Dark Horse (yay!).

Because I hadn’t walked enough already (eep!) I then walked the con floor, which literally took an entire day, and was, as usual, chock-full of cool merchandise I coveted. I tried to exercise restraint, but did come away with a couple of must-have Marvel exclusives (like the Skottie Young Deadpool glass and the Asgardian Periodic Table shirt) and other little collectibles (like the Littlest Lego Star Wars Rebel Pilot Ever, at 2 cm tall!). I also got some fun freebies from the Marvel booth (like Thor #1, Ultimate Spider-Man #1, an Agents of S.H.I.E.L.D. poster, and Guardians of the Galaxy trading cards); snagged a couple of The Hunger Games: Catching Fire posters of Katniss and Peeta; picked up the preview issue of Dean Haspiel and Mark Waid’s new project, The Fox; swung by the Dark Horse booth and finally met long-time Twitter-friend @VictorGischler and picked up the first issue of his new series, Kiss Me, Satan, which I’ve been wanting to read; met Richard Clark and picked up the first issue of his new miniseries with Corey Taylor of Slipknot and Stone Sour, House of Gold and Bones; stopped by the Unshaven Comics booth and picked up their Samurnauts Genesis issue; and caught up with awesome Walking Dead artist Charlie Adlard.

Along with all of the cool comics stuff and people to see, some of the most stellar voice actors working today were at various booths doing signings for fans; so of course I said hello to some of the great voice actors I’ve interviewed for ComicMix, like John DiMaggio (who signed a cool Fry and Bender pic a fellow fan gave me); Billy West; and Rob Paulsen, who was at the ShiftyLook booth talking about Bravoman. Stopping by ShiftyLook was cool, because I also got to meet Shiftylook creator Dax Gordine and editor Ash Paulsen (yes, he’s Rob’s son) and chat with them about the upcoming Bravoman shows, which will also feature Jennifer Hale as new character Bravowoman, who has cool superpowers and is not being brought into the show as a love interest for Bravoman (thank goodness, because that trope is so tired).

Speaking of voice actors, pretty much all the panels I made it to this year were voice actor-related, since they’re always so much fun. I started with the Teenage Mutant Ninja Turtles panel (and FYI, also interviewed TMNT executive producer Ciro Nieli and Michelangelo voice actor Greg Cipes, so stay tuned for that). The panel featured Nieli, Cipes, story editor Brandon Auman, Rob Paulsen (Donatello), and Hoon Lee (Master Splinter), and I was super excited when they decided to screen the entire first episode of Season 2, since of course I wasn’t near a TV to watch it on Saturday. The first episode was great, and shows a shift towards a slightly darker tone, as the Turtles accidentally loose a bunch of mutagen canisters on the city, mutate a friend, and realize their responsibility for the mess they’ve created and for fixing it. I can’t wait to see how all of that plays out. At the panel they also showed some great unfinished clips that highlighted both a few upcoming story details (like Michelangelo’s, erm, interesting cooking skills, and Master Splinter answering a cheese-wheel phone!) and the cool process involved in taking a show like TMNT from concept to full animation. And of course all of the voice actors graced us with bits of dialogue in their character voices – including Hoon Lee, who at the request of one of the other panelists, read a menu description as it has never been read before; and Greg Cipes, who sang a hilarious little song that accompanies Michelangelo’s cooking, and then a little booyakasha ditty with Rob Paulsen.

The next voice actor panel I went to was the I Know That Voice panel, about the voice acting documentary that John DiMaggio is executive producing, which comes out this December and premieres in Hollywood on November 6. I went even though I’ve already seen and reviewed the documentary, because I knew it would be a good time. The panel was fantastic, and packed to the gills. We only barely got in and had to stand in the back for the first half. NYCC definitely should have put it in a bigger room (especially considering the SDCC panel, which was packed with about 2500+ fans!). The panel featured John, Rob Paulsen, Billy West, and casting and voice director Andrea Romano, and John actually screened the first fifteen minutes of the documentary; after which he opened the floor to questions, and the usual voice actor hilarity ensued (one of my favorite moments was when John called on a Batman cosplayer standing with a Harley Quinn and commented on the pairing. The Batman quipped, “Don’t tell the Joker!” To which John responded, smooth as anything, “You just did!” Classic). John shared the moment when he first realized he wanted to be an actor, which was cool; and John and Rob shared jobs they’d like to get that they haven’t been called for yet (Rico in the upcoming Penguins of Madagascar movie; and Donnie in the new TMNT movie. Call them, movie folks!! I can’t imagine why you wouldn’t!). In the same breath John and Billy also hinted at Matt Groening’s future plans for either the continuance of Futurama, or perhaps a new Groening show on which Billy and John might work. (OMG!)

The last voice actor panel I went to was the Adventure Time panel, which was also a blast (and I have never seen so many Finns and Jakes in one place, I tell you what. The little kid Finns were the cutest). They showed some great show clips, featuring Lumpy Space Princess giving romance advice, Jake getting stuck in quicksand, and a truly harrowing fight with The Lich; and of course answered questions. John DiMaggio shared a cool story about creator Pendleton Ward’s childhood aspirations, and Ward shared some great insights about his creative process. Ward also talked about how much he identifies with Lumpy Space Princess. And then, because the panel wasn’t already awesome enough, DiMaggio sang the bacon pancakes song and had the audience sing it too; and Jeremy Shada sang the Baby Finn song. And then we all left a voicemail for Brian Posehn, because that’s how John DiMaggio rolls at panels.

Whew! So I think that about sums up my experiences at NYCC this year; and what great experiences they were. I hope you all enjoyed the recap, and if you feel like you still need more, then just check out all the cool pictures I took.