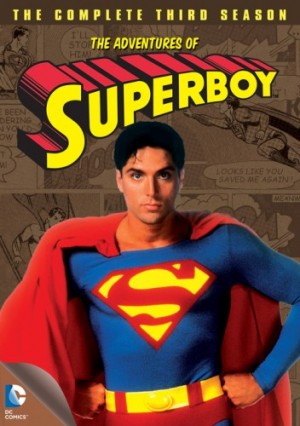 When last we visited Clark Kent and Lana Lang, they were at college, leaving Smallville behind and as Season Three of the syndicated series arrived, it came with changes. The first was that Superboy became The Adventures of Superboy and then the focus moved the characters from the well-named Shuster University to a quasi-internship at The Bureau for Extra-Normal Matters in Capitol City, Florida. Clearly, the actors were aging and the premise of them being in college stopped making sense, plus menace of the week stories was becoming tougher to make plausible on the static campus. The more plausible setting worked for super-heroes but certainly took something away from the civilian side of life, a similar issue plaguing Smallville in its latter seasons.

The third season, out now on DVD from Warner Archive, also brought the welcome removal of the annoying Andy McCalister, character, with actor Ilan Mitchell-Smith taking a curtain call in this season’s “Special Effects”. He was replaced in the cast with coworker Matt Ritter (Peter Jay Fernandez) and the Bureau chief C. Dennis Jackson (Robert Levine).

While there are certainly foreshadowing elements to the far more successful Smallville, the tone this season actually evokes memories of Robert Maxwell’s film nourish first season of The Adventures of Superman, which ran some thirty years earlier. Credit for this positive change, reflecting the adult reality the leads now found themselves, goes to producers Julia Pistor and Gerard Christopher, with DC Comics’ support and approval. Christopher, who inherited the cape the previous season, seems comfortable in the uniform and while no great actor, certainly was stalwart.

The thirty minute format remain inhibiting so character development was almost nil except when it played a role in the story such as “Rebirth” where Clark thought he took a life and hung up his cape. Every series has to explore alternate futures and this series honored that trope with both “Roads Not Taken” and “The Road to Hell”, the latter a fine two-parter with former Tarzan Ron Ely as an aging Man of Steel from a possible future.

On the other hand, several stories seemed mired in the past such as “Wish for Armageddon”, which felt like an antiquated Cold War story in the aftermath of the Berlin Wall’s collapse.

Luthor, Bizarro, and Metallo make return appearances as opponents while first timers included The Golem in a strong neo-Nazi story. Pa Kent (Stuart Whitman) turned up for an appearance, a reminder of when Clark’s life was simpler and dad was always there to guide the way.

Overall, it’s a stronger season than the preceding one, but also one that less resembled the comics fans wanted and appeared somewhat alien to the general audience, neither resembling the comics or the film series.

The transfers are fine overall and the made-to-order 26 episode, three-disc set comes without any bonus features.