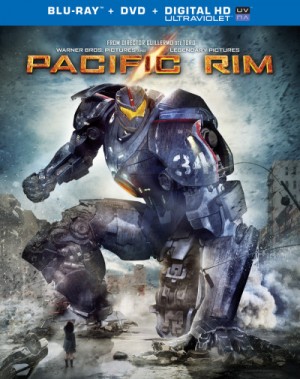 I find Guillermo del Toro an incredibly imaginative visualist and energetic storyteller but his movies tend to be overly stuffed with too many elements to crowd the story (Hellboy II) or too many visual and nowhere near enough story (Pacific Rim). I found the latter film incredibly showy, loud, and disappointingly predictable and dull. The worldbuilding is nearly nonexistent, the characters half-baked, and the Kaiju underwhelming.

Back in my Weekly World News days, Addie Blaustein would create a Kaiju and I’d be challenged to write a piece about whatever she conjured up so I know a little something about the Japanese genre and its history. The creatures del Toro and his effects team offer up are large, loud, and messy. But they lack differentiation. Oddly, the Toho monsters had character and a different approach to their attacks. The Kaiju, levels 1-5 here, emerge from the water, attack a city and roar a lot. While visually different, they’re boring.

So are the humans manning the mecha, excuse me, Jaegers, that have been designed to battle them. We have the stereotypical Chinese and Russians, the flinty Aussies and the stoic American brothers. Ho hum. Five years after losing his sibling in a horrible battle, Raleigh Becket (Charlie Hunnam) is coaxed back by his former boss Stacker Pentecost (Idris Elba) into a final fight with the very fate of the world at stake. Gosh, who will be good enough and compatible enough to work in tandem with him? Could it be Mako Mori (Rinko Kikuchi), Pentecost’s aide with traumatic issues of her own? Of course.

Screenwriters Travis Beacham and del Toro tell us the world is under attack by alien beings under the surface and that after all these years, the Kaiju are winning and humanity is threatened. But after all the death and devastation, we have no real sense of what life is like for the common man and woman. What’s the global economy or political landscape like? The dull narration early on provides us some clues but glosses over things to give us one fight after another that is often at night and cut so quickly you can’t quite tell what’s going on.

One irksome point was that Dr. Newton Geiszler (Charlie Day) had to go to the black market to find Kaiju samples to study when one would think understanding the creatures would be a major priority for the world leaders so they can develop effective countermeasures. Day’s performance is over the top, beat only by Burn Gorham’s wacky mad mathematician. Both feel like they were imported from some other film. 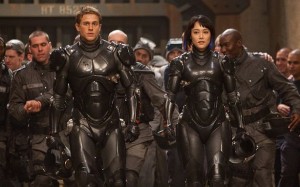 You would think del Toro’s valentine to the monster movies of old would be more fun but instead, it plods and roars and bores. Rock ‘em, Sock ‘em robots versus Godzilla wanna-bes! This should have been epic and falls short on almost every level. Rather than dropping a bomb to seal the portal to Pellucidar or wherever the aliens are residing, it would have been far more interesting to send the mecha down there and bring the fight to the manufacturers of these monsters. Instead, the threat is sealed, leaving matters unresolved until the unnecessary sequel.

The summer IMAX 3-D blockbuster is out on home video now in a variety of packages from Warner Home Video. The one most of you will wind up with is the Blu-ray, DVD, Ultraviolet combo pack and it’s good to know that the video transfer is wonderful with bright colors where appropriate and clarity throughout. Additionally, the DTS-HD Master Audio 7.1 and 5.1 surround tracks are wonderful.

The package comes with two Blu-ray discs because the extras spill from one to take over the other. On disc one you get the film and can listen to del Toro’s fascinating Audio Commentary, which delves into his influences and discusses the challenges to bringing his imagination to the screen. There are 62 minutes’ worth of Focus Points, a baker’s dozen of featurettes. For the record these include: A Film by Guillermo del Toro (4:47), A Primer on Kaijus & Jaegers (4:09)

Over on the second disc you then get the interactive The Director’s Notebook, which allows you to flip through his digital handbook on the making of the film, allowing you to go from still images to interviews, and tons of details on the pre-production designs. You can even use the