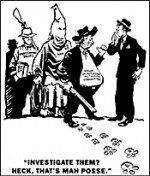 It seems like every day I read about another editorial cartoonist losing his job, and that’s a real shame.

Editorial cartoons are one-panel comics that told an entire story that commented on the news of the day. It wasn’t long ago that this stuff was run on the front page of many, if not most, great American newspapers. Everybody had one on staff – except the Metropolis Daily Planet, which, oddly, didn’t seem to hire many cartoonists. Most newspapers also deployed syndicated editorial cartoons as well. Many weekly newsmagazines reprinted them, and The Week still does.

There were brilliant editorial cartoonists. And by “brilliant,” I mean text-book phenomenal. My favorite was Bill Mauldin; other greats include Ron Cobb, Paul

Just to name a few. If you’re unfamiliar with either the concept of editorial cartoons or of any of these great people, go Google around. You’ll be glad you did.

What confuses me is that this is simply another part of newspapers divesting themselves of that which makes newspapers unique, in the name of “being contemporary” and in the cause of losing less money. That’s throwing out the baby and drinking the bathwater.

The Chicago Sun-Times recently fired all its staff photographers and gave iPhones to its remaining street reporters. Newspaper photography shows us a moment in time that does not, and cannot, exist on television or in any streaming media. Historically, newspaper comic strips were the second-most read part of the paper – just below baseball box scores (in winter, the football betting line). Now that there are very few two-newspaper markets, everybody has pretty much the same comic strips, reduced to the size of postage stamps.

The Sunday newspaper supplements are a thing of the past. A few survive, but have little worthwhile. Some gossip, a nice puff piece about some ersatz celebrity, the horoscope, and now that Macy’s owns all the department stores, a dwindling number of advertising pages. It’s been so long that even I had to count on my spell checker to make sure “rotogravure” was spelled correctly. It was, but that’s because my nostalgia gene is hyperactive.

And now, editorial cartoons rapidly are going the way of the buggy whip.

It’s all very sad, and I can say that without tingling that nostalgia gene. The editorial cartoon is an important part of what makes a newspaper great.

Oh, yeah. I know. Some of you younger folk are going to have to Google the phrase “newspaper” as well. Go ahead. You’ll learn something about what made this nation great.