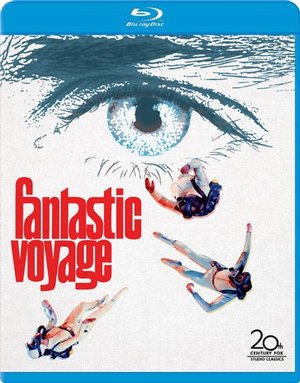 After a decade of low-budget cheesy special effects science fiction films, the early 1960s was particularly quiet, ceding to television series such as Star Trek and The Time Tunnel. But, also released in 1966 was an eye-opening spectacular that had a plausible premise, strong cast, and the next generation in film special effects. Fantastic Voyage may be remembered today for Raquel Welch in a tight outfit, it is also a step forward in cinematic SF. Thankfully, it preceded 2001: A Space Odyssey by two years.

At a time when miniaturization was making home technology smaller and more sophisticated, the idea of inserting a tiny sub full of humans into the body of an ill scientist seemed the next logical step. The body in question was the victim of an assassination attempt and his knowledge and life had to be saved so a daring experiment was to be undertaken. Forget that the sub is nuclear-powered and the physics doesn’t quite make sense, but this is an ambitious leap forward in man’s quest to understand himself.

Once entering the body they have to contend with antibodies, foreign matter, and a ticking clock. So of course things go wrong en route to the blood clot located in the man’s brain. Harry Kleiner’s screenplay (from a story by a story by Otto Klement and Star Trek’s Jerome Bixby) ignored the original intent for being a Jules Vernesque escapade and dashed the sense of wonder in favor of a dated Cold War vibe.

Richard Fleisher, a skilled and versatile director who helmed Barabbas, Doctor Doolittle, Soylent Green. and yes, Conan the Destroyer, brings his A game to the film, never letting the mind-blowing special effects overwhelm the adventure. He let his cast, led by Stephen Boyd, Raquel Welch, Edmond O’Brien, and Donald Pleasence, actually act and treat this as a plausible mission. Harper Goff, who gave us the Nautilus in Fleisher’s 20,000 Leagues Under the Sea, provided the designs for the Proteus while Ernest Laszlo  made the blood stream a hallucinogenic treat. Leonard Rosenman made a conscious decision not to add music until the crew was inside the scientist’s body so it added to the unreal feel of the location. All told, the film worked better than anyone expected earning it Oscars for Best Art Direction – Color  and Best Special Effects.

The film’s unheralded star was actually Isaac Asimov, who wrote the novelization and corrected numerous logic and medical flaws which were later incorporated into the film, keeping it from being silly. His work was fast while the filming was repeatedly delayed so the book was out a full six months ahead of the film making many think it was an adaptation of his work. 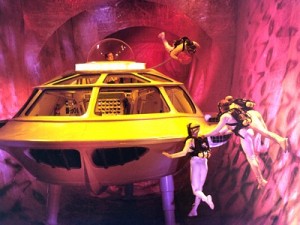 All told, though, today’s CGI easily beats the traditional special effects, automatically making the film feel old. The Cold War stuff distracts from a human adventure and the writing is stiff in places while the direction is leisurely compared with today’s quick cut culture. But this was a pioneering effort that restored a modicum of respect for the genre, paving the way for Kubrick and those who quickly followed. As a result, the film is well worth watching.

Therefore, it’s good to see that the transfer to high def was pretty solid although not perfect. The mono mix is transferred nicely so both add up to a pleasant viewing experience at home.

As for the extras, an incomplete collection from the Cinema Classics Collection DVD are repeated here, including

Most but not all of the supplements from the Cinema Classics Collection DVD have been ported over to this Blu-ray release. They include: Commentary by Film and Music Historian Jeff Bond; Lava Lamps and Celluloid: A Tribute to the Visual Effects of Fantastic Voyage (17:40)which is a useful tutorial on how they accomplished it all; Whirlpool Scene: Storyboard to Scene (2:22); and the Trailer and TV Spots (13:07). Additionally, there is an  Isolated Score Track With Commentary from Bond, who knows his stuff accompanied by Jon Burlingame and Nick Redman.