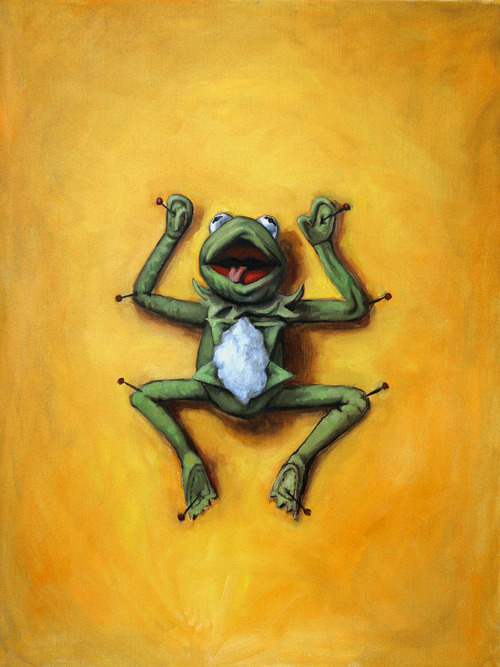 The Cookie Monster finished duct taping Kermit to the chair, stepped back, removed a cattle prod from somewhere within his fur and growled, “Where cookie?”

“I don’t know where your cookie is,” Kermit whined.

The Monster brandished the cattle prod.  “Last chance.  Where cookie?”

Then he jammed the cattle prod into the part of Kermit’s anatomy that would have sported genitals, if puppets had genitals, and pressed a stud.

Let us draw a curtain of discretion across the remainder of this distressing scene and allow your imagination to supply the rest of it.  (Though, just between you and me, if I’d been the Monster, I’d’ve used my prod on Oscar the Grouch.)

Yeah, torture.  Seems like a muppet or an old comics guy can hardly go to the multiplex or even turn on the television without seeing somebody tortured.  And it’s not only the bad guys doing the torturing, it’s just as likely to be good guys.  And not just the rugged ass-kicking variety of good guy, either.  A few weeks ago, on an episode of Elementary, brainy Sherlock Holmes, who solves crimes by thinking about them, had a baddie trussed up and ready for some ouch, and last night on The Mentalist, a lovely lady named Lorelei used electricity on a suspect. (Okay, technically Lorelei was a criminal,but she was a darn sympathetic criminal and–spoiler alert!–I was sorry she croaked at the show’s end because I wanted to see more of her.)

As for movies…there’s been a lot of controversy about the lengthy waterboarding in the generally excellent Zero Dark Thirty, and as for The Girl With the Dragon Tattoo…you have to suspect that Lisbeth Salander enjoyed the attention she gave that bastard who’d been exploiting her, not that he didn’t deserve some kind of negative attention.

I have no hard evidence for this, but I think I’ve seen more vivid portrayals of torture in the last five years or so than in the previous fifty. I have to wonder why.

Though I didn’t watch 24 after the first few episodes, word on the street is that hero Jack Bauer often used pain to extract information and in that he may have been a bit of a pioneer. (Now all the kids are doing it…) We’re talking mass entertainment here, in prime time, no less, and the question is, what has suddenly made torture acceptable?

One possible answer is that it’s been in the news a lot and hard-pressed, deadline-fighting scripters might tend to use what’s in the air.  Another possibility is that the White House gang, particularly the previous White House gang, has not been exactly disapproving of what is sometimes referred to as “enhanced interrogation.”  Do some folks, heaven help them, still believe politicians?  (If Uncle Dick says it’s okay, that’s plenty good enough for me…) Could be.

We haven’t mentioned “right” and “wrong,” nor will we.  Not today. That large and complicated subject will have to wait for another time, and perhaps another place.