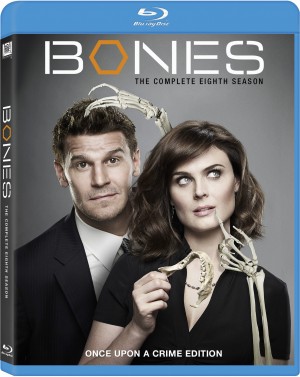 We’re three weeks into the new season of Fox’s Bones but Bones Season Eight  is coming to home video on Tuesday, with all-new content! Thanks to our friends at 20th Century Home Entertainment we have a copy to give away.

Finally cleared of wrongdoing, Bones (Emily Deschanel)reunites with Booth (David Boreanaz) and the squints.  Although the team solves some of their most challenging cases yet, madman Christopher Pelant continues his murderous rampage – inching closer to Bones and Booth daily.  From solving the mystery of a roller derby darling’s demise to uncovering a previously unrecognized 9/11 hero to stopping a pandemic, Bones and the team make one remarkable discovery after another.  Meanwhile, as if the challenges Booth faces with parenthood and his unique relationship with Bones aren’t enough, his mother shows up after a 24-year absence, and there is shocking news about some of his colleagues. Relive all 26 killer episodes!

For a chance to win your copy of the Blu-ray just answer the question below:

What kind of rampage does Christopher Pelant go on in Bones?

Submit your answer by 11:59 p.m., Thursday October 10. The decision of the ComicMix will be final. The contest is open only to US and Canadian readers.