[[[Toy Story 3]]] is a textbook example of how to conclude a trilogy, a lesson that needs to be learned by movie studios. It also illustrates how a family film can work on multiple levels, touching all who watch it. This Pixar film is a farewell to childhood, one that parents watch wistfully and one that warns children to enjoy their youth while it lasts. Even the most jaded people will tear up during the final twenty minutes while the rest of us stated crying long before.

Disney has released Toy Story 3 in a variety of formats today, including the Combo Pack with two Blu-ray discs, standard DVD, and digital copy. Everyone should have this.

Andy has grown up. He’s packing his room, readying to leave for college and its time to part with his beloved toys. They’ve remained in the wagon-like chest for years, neglected and lonely, fretting for their future: garbage, attic or worse. The movie shows us that the attractive options also hide dark secrets and not every toy has a happy outcome. But toys endure and are meant to be handed down from generation to generation, which is what we learn once again.

Since the first film fifteen years ago, Pixar has remained at the technological edge and the characters look sharper and more refined, their movements more fluid and their world more realistic. The biggest improvement has to be in their depiction of human beings as we see Andy all grown up along with his family. Many of the key crew members involved have been along from the beginning along with musical composer Randy Newman which keeps the internal integrity solid. 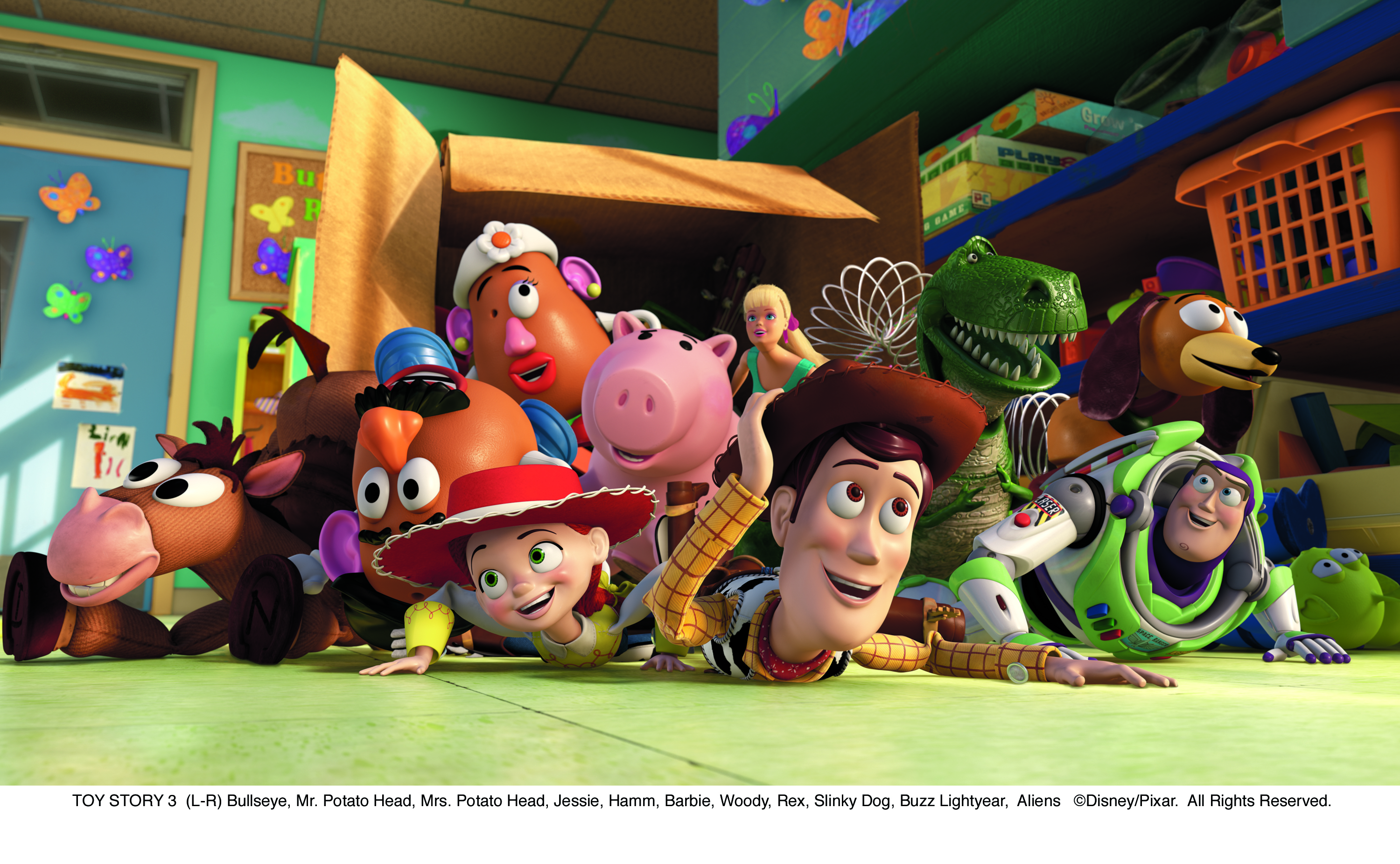 On the first Blu-ray disc, the movie is accompanied with the award-winning short, [[[Day & Night]]]
and [[[Buzz Lightyear: Mission Logs: The Science of Adventure]]], which were
seen elsewhere. It’s the second Blu-ray disc that is chock full of
featurettes. The movie is re-presented with two commentary tracks, one
with Director Lee Unkrich and Producer Darla K. Anderson and Beyond the
Toybox: An Alternative Commentary Track Featuring Leads from Story,
Tech, Art and Animation – Commentary by Story Supervisor Jason Katz,
Supervising Technical Director Guido Quaroni, Production Designer Bob
Pauley and Supervising Animators Bobby Podesta and Michael Venturini.
Both tell interesting stories and show storyboards, production drawings
and the like.

The rest of the extras are organized in sections:
Family, Film Fans, and Kids. Some are repeated but you get Toys! which
shows the creation of the Sunnyside Daycare and Bonnie’s Room toys;
Paths to Pixar: Editorial where you learn (sort of) what the film
editors do and how they can help shape the story; The Gang’s All Here
shows the reunion of the familiar vocal cast and what the films have
meant to them; the promotional A Toy’s Eye View: Creating A Whole New
Land, highlighting the Toy Story-themed playland at Hong Kong
Disneyland; three of their patented Studio Stories which gives you a
glimpse into life at Pixar; Bonnie’s Playtime: A Story Roundtable has
the crew reminisce about how her sequences were conceived;. Accidental
Toymakers, spotlights the small toy company that took a chance on
merchandising the movie after all the major companies proved
short-sighted; Goodbye Andy also examines how important it was to nail
the final moments perfectly to cap the story and the trilogy.

The
film’s adventurous opening is examined repeatedly as an example of the
filmmaking process, especially in Roundin’ Up A Western Opening and Life
of a Shot which shows how the sequence was conceived and executed,
which provides an excellent example of how many people are involved in
every frame.

In light of the just complete Gra-No-Wri-Mo here at ComicMix, I strongly suggest writers check out the[[[ Beginnings: Setting A Story In Motion short]]], where Screenwriter Michael Arndt uses Toy Story 3, [[[Finding Nemo]]], and [[[The Incredibles]]] as examples of how the three-act structure works.

You will laugh, you will cheer, and you will cry watching this story again
and again. Pixar has continued to lead the way in proving you can create
original stories and characters, tell compelling stories, and embrace
conventions while also defying them.