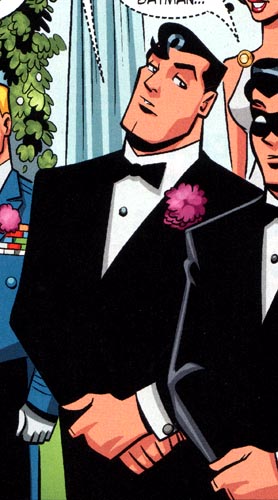 My good friend Martha Thomases, as usual, wrote an interesting column this week on her way to the Baltimore Con. She wrote about choosing what to wear at the Con and that, in turn, set me to thinking and provided grist for my own essay mill. Some weeks I need a lot of grist.

Something that’s important in comics and too little discussed is the importance of clothes. The fashion choices made by a character says something about that character. What you wear makes a statement about who you are even if that statement is, “I don’t care.” As often as not, my criterion still is, “Is it clean? Is it clean-ish? Does it at least not smell? Does it not smell too badly?”

However, I can dress up. I clean up fairly well, to be honest. I’m not keen on wearing ties but I know how and when to do so. I like hats, especially fedoras, although the Irish cloth cap works well on me. One wonderful fan made me a beret like GrimJack wears and I like that a lot and can be seen at conventions with it.

Some people dress for success. Some people dress to be invisible. Choices are made even when it appears to be a non-choice. If you say, “I don’t care how I look; I don’t think it’s important,” that’s a choice. It says something and don’t bother maintaining that it doesn’t or shouldn’t matter. It does. We make up our minds about people right away depending on how they appear to us. They do the same with us. Assuming the phrase, “Dress for the job you want, not for the job you have.” Is true, why is it true? The answer is we want people to perceive us in a certain way even if our goal is not to be perceived, to blend in.

When I was working with student artists, I wanted them to look at different source materials for the way people dressed. Tony Stark and Bruce Wayne would be more likely to dress out of GQ whereas Peter Parker might dress from the Old Navy store.  Here’s an extra-points question – how would Tony Stark dress differently from Bruce Wayne? Bruce’s suits are a costume for the playboy image he plays whereas Tony’s wardrobe is who he is (and, yes, I’m including the Iron Man costume).

Certain costumes can be a short-hand to who the character is – in Westerns, it used to be the good guys wore the white hats and the bad guys wore the black hats. Made things simple – an oversimplification, really. Clothing and costumes can describe a character but they can’t be substituted for characterization itself.

Clothing can reveal character: who the individual is, how they think of themselves, how they present an image of themselves. We do it (deny it if you want) and so characters do it as well. What’s true in life should be true on the page.

A very fun aspect of this in the past few years has been the rising importance of cosplay (costume playing for those of you who don’t know the term) as part of fandom. Fans become the characters they see in the comics or on the screen. The costumes can be elaborate or silly or elaborately silly or anywhere in that spectrum. They’ve become fixtures at most conventions these days and are often stunning. They’re a merger of the person who is wearing the costume and the character they represent.

Whether it’s in a drawing or in prose, clothes can make the character and if you want to work as an artist or a writer, you’d do well to remember that.