Where Are The Superheroine Movies? 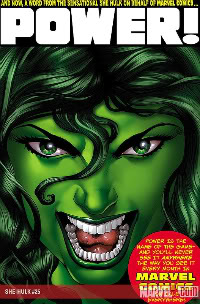 Over at Cinematical, Elisabeth Rappe responds to all the acclaim for Iron Man by pointing out a deficiency in the booming business of comics being adapted to film.

Looking around the cinematic landscape, at the likes of Tony Stark, Bruce Banner, Bruce Wayne, Hellboy and the like, Rappe notices something missing: superheroines. And, even worse, Marvel’s recent announcement of more male heroes headed to the screen and ongoing delays in a Wonder Woman project, it looks like no female heroes will be hitting the big screen anytime soon.

It has been eight years since X-Men

made comic book movies big business, and we have yet to see a proper superheroine. Ant-Man is on a faster production track than Wonder Woman – and who is more recognizable to the general public? Why is Thor more palatable to the mass audience than Black Widow? I don’t buy that there isn’t a mass appeal for these stories.

It probably doesn’t help the studio perspective that the only two comic heroines allowed to fly solo were disasters. But was there ever a smidgen of care given to either Elektra

during the writing or production process? Neither film was entered into with that Iron Man spirit; they were careless and cheap, and turned out predictably awful. It’s no surprise that a movie bombs because it sucks – but surely, the suits are ascribing that largely to heroines being lousy sells. It says volumes that neither are worth the kind of relaunch The Incredible Hulk is getting. Why not bring back Elektra to revise big screen history? I’d pay to see it in a heartbeat.

A lot of food for thought, and plenty to agree or disagree with. Interestingly, Rappe doesn’t place any of the blame on the comic book industry, which has been called out for giving women short shrift plenty of times.